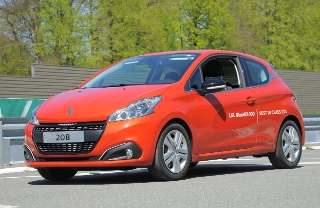 This performance was achieved at the end of April on the Peugeot test circuit at Belchamp in France, supervised by the French Type Approval Authority, UTAC (Union Technique de l’Automobile, du motocycle et du Cycle).

The standard production Peugeot 208, with the 1.6-litre BlueHDi 100 S&S engine and 5-speed manual gearbox, ran for 38 hours with several drivers each taking a turn of three to four hours at the wheel during the scrutinised test.

The Peugeot model tested was a ‘Very Low Fuel Consumption’ version, with an official Combined Drive Cycle fuel consumption figure of 94.2mpg (3.0 l/100km) and low CO2 emissions of 79g/km. This version is characterised by the presence of an aerodynamic rear spoiler and the adoption of ultra-low rolling resistance Michelin Energy Saver+ tyres.

On sale in Europe from June and autumn in the UK, the new Peugeot 208 brings a range of efficient Euro6 petrol and Diesel engines, with petrol emissions from 97g/km while with Diesel, the BlueHDi range is now entirely below 95g/km.