The new Peugeot 208 has dropped a Euro NCAP star compared to its predecessor after meeting five-star requirements in all areas bar protection of vulnerable road users. 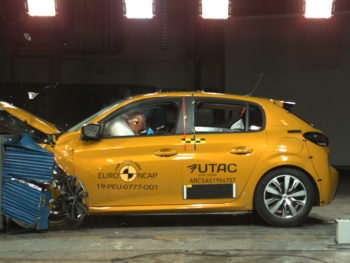 The ratings – published alongside figures for BMW’s new 1 and 3 Series and the Jeep Cherokee – show that the 208 scored highly for adult occupant protection (91%), child occupant protection (86%) and safety assist (71%) but its figure of 56% for vulnerable road users demoted it to a four-star rating.

The testing also found that the Jeep Cherokee sits squarely in four-star territory, with good but unexceptional performance across the board, but a huge improvement over its larger stablemate, the Wrangler, tested last year.

Commenting on the results, Thatcham Research said the 208 and Cherokee were the first to fall, following an unprecedented sequence of top awards for all cars rated so far in 2019.

Director of research Matthew Avery said: “The Peugeot 208’s four-star rating is respectable, but the car is not a good choice if you’re carrying adults in the back, with its ‘Poor’ whiplash protection for rear passengers. Protecting both front and rear occupants is especially important as families continue to downsize from larger vehicles.”

He added: “The Jeep Cherokee is an improvement on last year’s one-star Wrangler. However, there’s still a long way to go before Jeep can get back to producing five-star cars like the 2017 Compass. The Cherokee’s Adult Occupant Protection (80%) and Child Occupant (78%) scores are the lowest awarded in 2019, while the front and rear seats again offered marginal whiplash protection. Its low-speed Autonomous Emergency Braking system didn’t meet the mark either.”

Meanwhile, the 3 Series is credited with having put in the best safety performance of any large family car tested by Euro NCAP against the 2018/2019 protocols. The tests saw it score 97% for adult occupant protection, 87% for child occupant, 87% for vulnerable road users and 76% for safety assist.

Euro NCAP secretary general, Michiel van Ratingen said: “It’s good to see the premium brands, from Germany and elsewhere, maintaining the very high standards they have set for themselves and continuing to achieve five-star ratings. I’m sure that BMW’s customers can be confident that the company will continue to strive for the highest standards of safety, even as our protocols get tougher and tougher.”

Commenting on the 3 Series results, Thatcham’s Matthew Avery suggested that “whilst good, its 76% score for safety technologies is down on the 94% benchmark set by the Tesla Model 3 earlier this year”.

Avery added: “The BMW 1 Series also scored a top Euro NCAP rating, but again did not quite meet the standard set by the Mercedes A-Class in 2018. This goes to show how Euro NCAP ratings are driving an incredibly competitive safety market.”