A total of 10 new BMW i3 electric vehicles have been deployed in Oxford as part of the Co-wheels Car Club fleet. 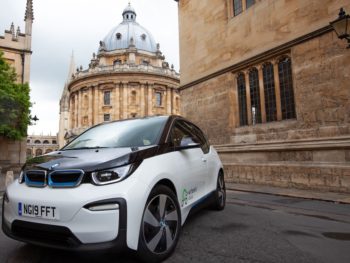 The 10 new BMW i3s are based at sites across Oxford

The vehicles are based across the city, including in car club bays previously used for petrols as well as new on-street EV locations in Jericho and West Oxford.

The addition of the new vehicles marks one of Co-wheels’ biggest roll-outs of EVs to date and means Oxford now has more shared electric vehicles per head of population than any other UK city known of.

Richard Falconer, director of Co-wheels, said: “We have seen a high demand for EVs with an improved range from Co-wheels members in Oxford and we have delivered – the BMW i3s allow for longer journeys. Oxford residents can now enjoy using the new BMW models whilst reducing the impact on our environment.

Councillor Tom Hayes, Cabinet Member for Zero Carbon Oxford at Oxford City Council commented: “Car ownership promises to be a thing of the past before long, so it’s particularly great to see more opportunities for car sharing that will protect our health and climate. Oxford is determined to be the leading city of the UK for reducing car journeys and ensuring that the majority of however many cars are left on our roads are zero emissions.”