By Natalie Middleton / 6 years ago / Features / No Comments 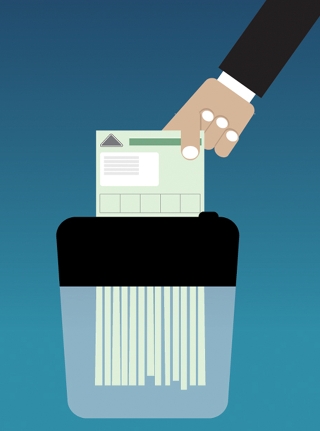 It’s over three years since the Government announced that the paper counterpart to the photocard driving licence was to be axed as part of the Red Tape Challenge, and while we’ve waved a fond farewell to the tax disc, the paper licence still remains despite the initial 1 January 2015 deadline to abolish it having already past.

Now the DVLA has finally confirmed that the paper counterpart will be gone as of 8 June this year. From this date, the driver’s licence (whether photocard or paper) will remain the official document that shows what vehicles a person can drive; but the driver record held by DVLA will be the only legal source of penalty point endorsements – paper driving licences will no longer be updated with endorsements.

The change of date has given the DVLA an extra six months to develop suitable digital enquiry services for driver detail checking after its initial plans came under fire from the fleet industry for being time‐consuming and costly.

The DVLA is proceeding with its plans for free‐of‐charge services that will build on the existing View Driving Licence service, which allows GB driving licence holders to view their driving record online. The new 24/7 Share Driving Licence service will go live about a month before the June deadline and will allow the driver to generate a one‐time use code, which is valid for up to 72 hours, to enable a third party to see their licence status, endorsements and what vehicles they can drive.

The information will be accurate at the time of download and is a snapshot of the record at that time. The DVLA has said that the service is free and it has no plans to charge for it in the future. The DVLA is also looking to introduce GOV.UK Verify as the authentication means for View Driving Licence in the future.

The premium‐rate phone service will also remain in effect although the driver must be present to access data.

Meanwhile, the DVLA is also developing the Access to Driver Data (ADD) service for businesses and organisations who would prefer to draw driving licence information directly into their own systems – this includes third‐party licence checking providers as well as some end‐user fleets.

ADD differs to the current Electric Driver Entitlement Checking Service (EDECS) offering as it allows for real‐time checking of the drivers’ database, as opposed to an overnight batch run. The DVLA added that there are no plans to decommission the EDECS service at this time.

The system is currently in beta testing and the DVLA hasn’t released full details yet, but it will allow for realtime enquiries to be made against the DVLA drivers’ database with the consent of the driver. The third party will be able integrate the data file they receive into their own system. The service will initially cater for one‐at‐a‐time enquiries with a batch enquiry facility planned for future development. Access will be governed by a contact with DVLA – although the requirements for this contract are currently being worked through, as are costs, but the DVLA said that it is looking for the contracts to be put in place for the summer. However, there will need to be a lead‐in time to have the IT put in place. Some third‐party providers are already launching using this system.

The changes will leave employers with a choice as to whether they use the free “self‐certification” approach via the DVLA database or instead look to outsource driving licence checking to a third party offering paid‐for services that are said to bring vastly reduced administration and increased efficiency, particularly for fleets with large numbers of licences to check. There will also be the Access to Driver Data service – although the industry is still waiting for full details on how this will work, the DVLA has said that the decision for fleets deciding whether to use this or the Share Driving Licence services will depend on where the responsibility for licence checking lies within the fleet and if it is at a central office for all company drivers or delegated to the local/regional transport managers. However, many fleets are expected to use third‐party services instead.

For many firms, the move to remove the counterpart is expected to increase demand for licence checking as fleets will no longer be able to use the counterpart to check holders’ driving entitlement categories and current endorsements/penalty points. However, it is also very likely to increase accuracy of the data, as drivers won’t be able to use old/photocopied counterparts to hide any penalty points or, worst‐case scenario, actual loss of licence.

The DVLA has also launched a ‘toolkit’ online section for fleets, which will be regularly updated in the run‐up to 8 June: http://dvla.dft.gov.uk/dvla‐aoc‐toolkit.html

“The DVLA announced the 8 June deadline in the middle of December and were very specific on this.

There will be no shuffling back from that date so fleets need to be prepared and decide if they are going down the DVLA route or will use a third‐party provider.

Just don’t leave it too long.”

“Despite the abolition of the paper counterpart not coming into force until 8 June, we would advise fleets to move their records online immediately in order to avoid any issues.”

Malcolm Maycock, managing director, Licence Bureau “All fleet managers, particularly those with large fleets, should start planning now for any potential impact the counterpart abolition will have on the way they handle driver data.”

SUMMARY: Although the DVLA has already moved the implementation date once, it will not again, so fleets need to start acting now to decide which method they want to use.

Drivers should get rid of all licences “Drivers with a photocard driving licence should destroy their paper counterpart – just remember to keep the photocard itself.

1998 will still be valid and should not be destroyed.”

“The Driver and Vehicle Licensing Agency (DVLA) is abolishing the paper counterpart that accompanies the current driving licence photocard, but not the old‐style paper licences issued before 1998. These are still valid, but will no longer be legally accepted as having an upto‐date record of a driver’s endorsements, penalty points or disqualifications.”

SUMMARY: Drivers should keep all documentation until after the implementation date has passed and after that only get rid of the paper counterpart.

The abolition of the counterpart will have negative implications for fleets

“The DVLA’s decision to move licence data online will have a positive impact on the fleet industry, as licence verification will inevitably become quicker and more efficient.”

“ACFO believes the way forward is preferential to the current system of potentially leaving to chance that what an employee provides to their employer by way of their driving licence and paper counterpart being legitimate and a 100% accurate representation of their validity to drive.”

“An employee may have a photocard driving licence, but it tells the employer absolutely nothing about the driver in terms of their risk‐related endorsement points.”

“The fact that businesses will no longer be able to check the paper counterpart – a process that is fraught with error and the potential for fraud – is a positive move.”

SUMMARY: The changes may be arduous for fleets to put into effect but they will have positive implications foraccurate record keeping and road risk management.

Fleets will be able to check details without driver consent

“Employers can check their drivers’ details using the ‘View Driving Licence’ system, although doing so without consent breaches privacy laws. This is where

get drivers’ details without consent – that consent may now be given electronically as well as written but the bottom line is that consent has to be given. We know there are examples of employers using View My Driving Licence to get data illegally but Identity Assurance will improve once it uses GOV.UK Verify to verify identities, which will greatly reduce the risk of individuals’ details being taken without their consent. Data Protection legislation must be respected.”

“Fleets need to consider how they manage, record and keep driver data, and can obtain advice from the Information Commissioner’s Office (www.ico.org.uk). Alternatively, they can use an accredited driver licence checking service provider, who will ensure that driver details are stored and handled in a legal and compliant manner.”

SUMMARY: Fleets will need to get drivers’ consent for all checks and the new Identity Assurance Programme should help ensure this is undertaken.

The new DVLA solution will be ‘one size fits all’

“There are a variety of ways to undertake driving licence checks and this will be open to choice.

“This is a complicated requirement for any size of business but particularly for companies with 10 or more business drivers. Such firms will now have the decision as to whether they go down the DVLA’s ‘free’ Share My Driving Licence route, whereby each time a check is required the driver generates a PIN and passes it to the employer and the employer has to access the data individually, or whether they go to a third‐party provider for a fully managed service providing checks on an automated and continuous basis for a relatively modest fee.

“The Access to Driver Data system is in theory an option if a company wants to invest IT resources to access DVLA data but there will be direct and indirect costs to do this both set‐up and on‐going – it isn't clear what these are going to be.

Currently intermediaries pay set‐up and annual fixed charges plus a transactional fee – the pricing model for ADD hasn’t been confirmed, but expect it to align with whatever intermediaries have to pay to make it a level playing field.

“We believe that ADD will only be an economic option for the very largest of fleets who are prepared to make the IT investment. Instead, most businesses will look to outsource to a third‐party provider. Indeed the market for electronic checking is already at over 1.7 million checks per annum and growing rapidly as more businesses look to switch to electronic checking.”

SUMMARY: There will be a number of different ways that fleets can access drivers’ licences and their chosen method will depend on a number of criteria, including fleet size and set‐up. Many fleets may prefer to use a third‐party provider though.

“The abolition of the driving licence counterpart will have a particular impact on the daily rental sector, where companies rely on the document to check a driver’s entitlement to drive and any points or endorsements.

To ensure that the vehicle hire process continues to run smoothly fleets should talk to their rental provider about which of the driver information services they will be using.”

SUMMARY: The removal of the counterpart will have widereaching ramifications and will impact on anyone, other than the police, who has a need to check on driver details.

Drivers with both card and paper licences should discard the latter from 8th June.

• Drivers who only possess counterpart licences won’t be affected until renewing.

• Fleets should have employee consent to check records before launch of new DVLA portal.

• An offence will be committed should a driver’s personal records be accessed unlawfully.

• Fleets should digitalise their records as soon as possible in order to avoid any issues in June.