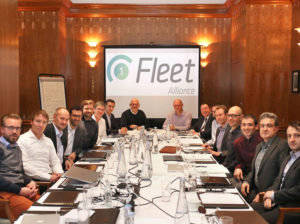 At a landmark meeting at London’s Savoy Hotel, 17 members of 1-Fleet Alliance – a group of telematics companies that together track more than 500,000 vehicles throughout Europe – took the decision to form a new commercial body.

Dubbed 1-Fleet Corporation, the organisation has been created to meet objectives including collaboration and networking, promoting innovation and telematics industry standardisation, as well as joint marketing and commercial agreements. 1-Fleet Corporation will also be able to offer pan-European telematics solutions, drawing on individual members’ expertise.

Pedro Zamith, a well-known figure in the automotive technology arena, was appointed to oversee the development and launch of commercial propositions on behalf of 1-Fleet Corporation.

“This was a landmark meeting for 1-Fleet Alliance, taking our collaborative activities to a new level,” said Joe Fenech Conti, CEO of Loqus, one of the founder members of 1-Fleet Alliance. “One of the primary benefits of the alliance is that it looks after the interests of the market in general, rather than the interests of individual suppliers. Despite the changing political landscape affecting Europe, cross-border trade will continue and technology will become increasingly uniform. At 1-Fleet Alliance, we will drive innovation and standards in the telematics field for the benefit of fleet operators across Europe.”

The new alliance is intended to benefit commercial fleet operators from the combined strength, global expertise and innovation brought by the diverse membership of the group. The group is also looking for partners in the fuel card and leasing/finance sectors for “synergetic offers”.

“It was pertinent that the meeting at the Savoy was held in a room used by Winston Churchill, who championed a stronger union between European nations, with a vision he famously called ‘The United States of Europe’,” said Martin Port, managing director of 1-Fleet Alliance member BigChange. “Despite all the talk of Brexit, there was an overwhelming consensus that closer cooperation is the way forward and that 1-Fleet Alliance should take a lead in the fast-growing telematics market.”