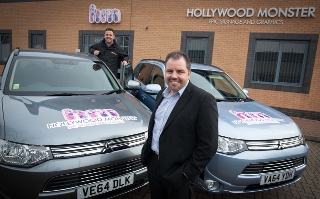 Launched in the UK last year, the Mitsubishi Outlander PHEV has an electric range of 32½ miles, emits just 44g of CO2 per kilometre, and boasts an official combined fuel consumption figure of 148 miles per gallon, which means that no vehicle tax is payable.

It’s also eligible for the government’s £5,000 Plug-in Car Grant, and because the Benefit In Kind is just five per cent, it means a virtual pay rise of several thousand pounds a year for company car drivers. What’s more, for business owners there are savings on National Insurance contributions to be had, plus it qualifies for 100 per cent First Year Allowance against business profits.

Daren Hollins, supply chain manager at Hollywood Monster, said: “With staff going on the road to speak to clients, check installations and undertake day-to-day business meetings, we were conscious that we were accumulating thousands of miles every year, which has a considerable financial impact on the business, as well as environmental implications.

“These new vehicles will play a significant role as we try harder to be more eco-friendly in the running of the business. We chose these cars because they look smart, are economical to run, and have a large boot capacity, which is what we need.”

Because of the Outlander PHEV’s ultra-low emissions, it’s exempt from the London congestion charge, and Hollins said: ‘We undertake a lot of work in London, so this was another factor that ticked a few boxes for us.’

He added: “As part of a government incentive, we will be able to have charge points installed at employees’ homes and we are also aiming to install charging points at our Tyseley headquarters.”