Ford has opened orders for its flagship Mustang Mach-E GT – its fastest-accelerating European five-seater ever. 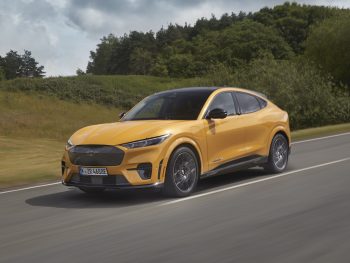 Starring this weekend at the Goodwood Festival of Speed, the Mustang Mach-E GT is priced from £67,225 and features a specialty tuned powertrain that delivers up to 487hp and 860Nm – the most torque ever of any production Ford road vehicle offered to customers in Europe and almost 15% more torque than the Ford GT supercar.

The Mustang Mach-E GT also gets an Untamed Plus drive mode, developed for track use and simultaneously adjusting traction and stability control to balance powertrain output.

It can be charged at up 150kW, taking battery capacity from 10 to 80% within about 45 minutes, and customers will have access to the FordPass Charging Network.

The Mustang Mach-E GT also gets MagneRide adaptive suspension and a high-performance Brembo braking system, along with bespoke tyres.

“Introducing Mustang Mach-E was a massive step on our journey to offering only zero-emissions capable, all-electric or plug-in hybrid passenger vehicles by mid-2026, and the buzz around it has been incredible, with sales and awards successes across Europe,” said This Woelpern, general manager, import vehicles, Ford of Europe.

“Mustang Mach-E GT is going to raise that excitement even more, by taking Ford’s expertise in practical, hugely fun-to-drive cars and SUVs into a new, all-electric era.”

The Mustang Mach-E GT is on sale now with a limited number of early release models. Deliveries in the UK are expected to begin later this year.