One in four drivers unaware of what a smart motorway is

Education on smart motorways and the rules for using them must be stepped up to stop more accidents happening, according to new research. 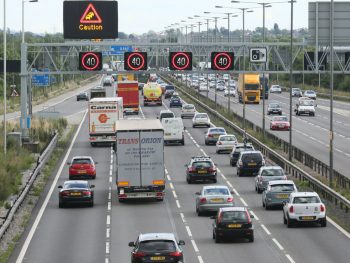 A quarter (25%) of drivers said they didn’t know what a smart motorway is, or the rules for driving on one, in the Brake/Green Flag research

A quarter (25%) of drivers said they didn’t know what a smart motorway is, or the rules for driving on one, in a survey carried out by Brake and Green Flag.

And less than half (48%) of the 2,000 drivers questioned actually knew the rules for driving on a smart motorway.

The research shows serious gaps in driver awareness but comes just eight months after a government report pledged an additional £5m for national, targeted communication campaigns to further increase drivers’ knowledge and understanding of smart motorways and how to use them confidently.

The funding is part of an 18-point package of measures intended to redress safety issues with smart motorways following an outcry over their safety; a BBC Panorama special aired in March found 38 people had been killed on smart motorways in the last five years.

But the findings from the Brake and Green Flag research also show a need to increase driver awareness for motorway driving in general. There is an average of two deaths or serious injuries every day on UK motorways, but one in five drivers (18%) admit to leaving less than a two-second gap, despite Highway Code guidance on this.

Driver knowledge about stopping distances on motorways also has room for improvement. Only a quarter (26%) of the survey respondents correctly identified that cars need 96m – or 24 car lengths – to stop if travelling at 70mph, whilst almost two-thirds (63%) incorrectly believe the stopping distance to be less.

Joshua Harris, director of campaigns at Brake, said: “These important findings confirm what we all suspected – drivers are confused about the rules of driving on smart motorways and communication efforts must urgently be stepped up to help avoid more tragic incidents on these roads.

“We welcome the measures the Government has outlined to improve smart motorway safety and urge them to follow this evidence-led approach for all UK roads. With more than 75 deaths and serious injuries on our roads, every day, improving road safety must be a priority for this Government.”