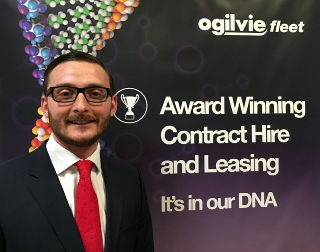 The launch of a salary sacrifice solution is the latest in a series of 2015 initiatives by Ogilvie Fleet to expand its share of the UK company car and van market and follows the recent announcement of a major new £100m funding facility with HSBC.

Ogilvie Fleet, which has almost 12,000 company cars and vans on its books and plans to almost double the fleet by 2020, says interest from existing customers for car salary sacrifice has increased in recent months.

Historically, Ogilvie Fleet’s heartland has been the sub-100 fleet sector but the company recently appointed David Raponi to lead its growth into the larger fleet sector. However, the business believes that salary sacrifice car schemes can prove attractive to large and smaller employers.

Ogilvie Fleet sales and marketing director Nick Hardy said: “Many leasing companies already have a salary sacrifice offering, but it is effectively a “bolt on” to the menu of funding solutions they already offer.

“In keeping with our reputation for customer service excellence and sophisticated IT systems, we now have a bespoke salary sacrifice car product available that we believe is at the cutting-edge of what is available.”

Ogilvie Fleet, which is headquartered in Stirling and has offices in Belfast, Birmingham and Sheffield, will specifically target employers with less than 1,000 employees with its salary sacrifice car solution, a sector of the UK employment benefits market which it believes remains largely untapped by the major providers.

Hardy said: “We want to be the market leader in that sector. Too frequently we hear that a salary sacrifice car scheme is most suited to the very large employers, but that is not true. We believe salary sacrifice is a flexible benefit that can prove attractive to smaller and medium-sized employers.”

Furthermore, many contract hire and leasing companies offering car salary sacrifice solutions are targeting the public sector, but Ogilvie Fleet’s focus will be on the private sector where it has its stronghold as well as the likes of local authorities and NHS Trusts where it also has customers.

Richard Jessop will lead Ogilvie Fleet’s drive into the sector having joined from Zenith and, as demand grows, will assemble a team dedicated to work with clients introducing schemes.

Jessop said: “The continuing stream from vehicle manufacturers of low-emission cars twinned with ‘attractive’ corporate and personal tax rates on those vehicles when compared with salary tax rates makes sacrificing earnings for a car financially beneficial for organisations and staff. We believe demand for salary sacrifice programmes will continue to accelerate.”