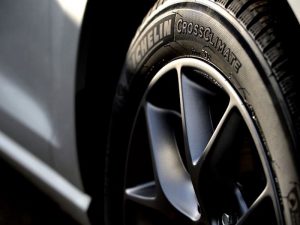 Neil Godfrey, fleet manager at Complete Price Eyewear, says he was impressed with how the Michelin CrossClimate tyres performed in tests

Swindon-based Complete Price Eyewear operates a total fleet of 180 cars, which spend five days a week on the road in all weathers, each clocking up 60,000 miles a year delivering at-home NHS opticians and hearing services.

Before moving 93 Honda Civic and Volvo V40 and V60 cars in the mobile optician’s fleet to CrossClimate tyres, Ogilvie Fleet put two sets to the test for six months on vehicles coping with the worst of Britain’s weather in the north of England and Scotland.

Fleet manager Neil Godfrey said that the implementation of the tyres on the fleet has proved popular with drivers: “Our optometrists and audiologists, who are working in the most demanding rural environments, say the tyres provide better grip on the road and have a shorter braking distance. Plus, a lot of my time has been freed up thanks to the move, as there’s now no need to organise a biannual tyre swap. This has not only improved overall safety for our employees, but as part of our on-going company corporate social responsibility policy, has greatly reduced our carbon footprint through improved tyre usage and efficiency savings.”

Jim Hannah, operations director at Ogilvie Fleet, added: “CrossClimate tyres are a fantastic choice for the UK fleet market, as they can handle anything the country’s notoriously unpredictable weather can throw at us.

“The tyres’ ability to cope with all types of weather eliminates the need to switch from summer to winter fitments, and cuts both the cost of employing a ‘tyre hotel’ and the associated fitting fees – which is particularly advantageous for companies with vehicles based all over the country. Removing the need to change tyres every six months ensures our customers can get maximum uptime for their fleet.”