Leaving the EU without a tariff-free trade deal could see the price of vehicles go up “about 10%” while the price of parts could rise “about 4.5%”. 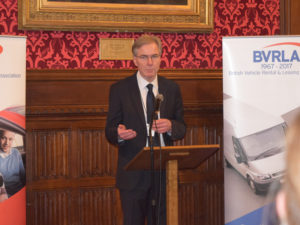 So said Gerry Keaney, chief executive of the British Vehicle Rental and Leasing Association (BVRLA), at its Parliamentary Reception held yesterday at the House of Commons where he warned of the consequent increased prices for customers and the knock-on effect of inflation and a negative effect on economic productivity.

Speaking at the event, Keaney said Brexit is the most important factor affecting the rental and lease industry going forward into 2018.

“Brexit covers all aspects of our business and it needs to be broken down. It’s very clear from a governmental perspective, that Brexit means Brexit, so we’re going to leave the single market.

“This makes it absolutely clear for us: we need a trade agreement, which actually gives us a tariff free environment. I think that’s critical for our members.”

Keane also highlighted how the BVRLA must maintain an industry presence whether in or out of the EU.

“Despite Brexit, we need to be in the Houses of Parliament and also representing [the rental and leasing sector’s] interests in Brussels, whether we are or not in the EU, because that’s where a lot of these key decisions are going to be made,” he commented.

Whatever the Brexit situation, Keaney concluded that the EU will still be a large influence on policy for the UK automotive industry and that: “It seems impossible to see the UK outside of the regulatory environment, as it affects vehicle standards, CO2, NOx and particulate emission levels.” Similarly, for safety standards, decisions will continue to remain being made in Brussels.

Keaney stated that the BVRLA must maintain its voice in the EU, citing the example of the OBD (on-board diagnostics) port, which is used by telematics companies and was due to be scrapped. That decision was overturned thanks to pressure by the BVRLA in the EU via LeaseEurope and other interested parties.

Moving forwards, Keaney added that the BVRLA will lobby for Autonomous Emergency Braking systems to become standard, as data from Thatcham, for example, indicates, “AEB reduces major accidents in the order of 38%”.

Other key fleet issues highlighted by Keaney for 2017 and into 2018 included air quality and the direct impact electric and ultra-low emission vehicles have on air pollution, as well as vehicle taxation and counter-terrorism.