Nissan has taken the wraps off its new Micra at the Paris Motor Show, bringing increased space, downsized turbo drivetrains, a new chassis and latest safety features to the supermini segment. 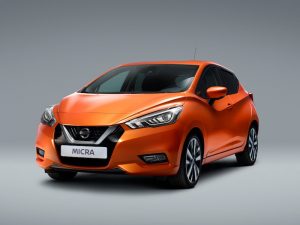 Building on from the Sway concept unveiled at the 2015 Motor Show, the new model is built on the Renault-Nissan Alliance’s CMF-B platform, also used for the Renault Clio, and is lower, wider and longer than its predecessors with more interior space – Nissan says cabin space is among the best in class.

It also brings Nissan’s latest design language, including the V-motion grille, boomerang-shaped lights and floating roof. Other features include rear door handles hidden in the C-pillars and an extended roofline with spoiler. The cabin features a lower driving position with greater seat adjustment, a fully adjustable steering wheel and the optimal positioning of the pedals and shift lever. It will also feature a 7-inch full colour central display, providing access to the audio system, satellite navigation, mobile phone, downloadable apps and Siri voice control via Apple CarPlay.

Engine line-up from launch will cover a 0.9-litre turbocharged three-cylinder petrol engine and a 1.5-litre diesel, both with 89bhp. These will be joined soon after by a naturally aspirated 72bhp 1.0-litre petrol engine.

A range of advanced safety features will be available across all grades and include Lane Departure Prevention, a segment first. Intelligent Emergency Braking with pedestrian recognition marks a first for Nissan vehicles in Europe, while Intelligent Around View Monitor, Traffic Sign Recognition, High Beam Assist and Blind Spot Warning will also be available.

Nissan says focus has been placed on agile chassis performance and technologies include Active Ride Control for enhanced ride comfort, and Active Trace Control for reduced understeer and sharper handling – features only available on Nissan’s Qashqai and X-Trail until now. A new brushless electric power steering system is also available.

The new model also brings improved aerodynamics. Helped by the combined roof and side spoiler, the new Micra has achieved a Cd of 0.29 – top level for a hatchback.

The new Nissan Micra will be built in Europe at the Flins, France plant of Alliance partner Renault and will start sales in Europe from March 2017.