Nissan has taken the wraps off its Ariya electric coupé crossover, heralded as a “true force of wonder” that marks a new chapter for the brand. 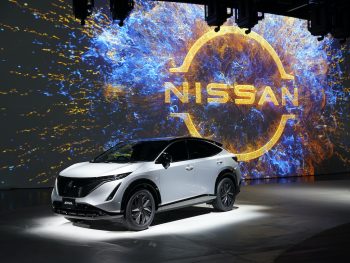 Offering an estimated WLTP range of up to 311 miles, the Nissan Ariya arrives 2021

Revealed globally in a livestreamed event in Yokohama, the Ariya is the first Nissan to wear the carmaker’s new logo and, as with the new badge, reflects the carmaker’s work in electrification, driver assistance and digital connectivity.

Offering an estimated WLTP range of up to 311 miles, it joins the Nissan Leaf in the carmakers’ EV stable from next year and draws on the similarly named concept vehicle displayed at the 2019 Tokyo Motor Show and previewed with the IMx at the 2017 Tokyo Motor Show.

The Ariya is big news for Nissan, forming part of its NEXT transformation plan, which looks to roll out 12 new models in 18 months. It will also enable it to compete with models such as the Tesla Model Y.

It’s built on an all-new Alliance-developed EV platform, which has been optimised to deliver claimed exceptional handling. The battery pack sits under the centre of the vehicle to ensure a low centre of gravity and near-equal weight distribution, front and rear. Thanks to the battery pack’s flat design and integrated cross-member in the battery case, the Ariya also has a flat floor and Nissan says it also offers impressive structural rigidity along with an exceptional balance of ride comfort, handling and performance.

The five-strong range in Europe will include single-motor rear-wheel and twin-motor all-wheel drive models with a choice of 63kWh and 87kWh batteries, enabling the Ariya to target urban/suburban commuters and longer-range drivers. It will also be rated to tow up to 1,500kg.

The 63kWh versions provide a 7.4kW charger for domestic use, while the 87kWh models include a 22kW three-phase charger. The Ariya can also support rapid charging up to 130kW.

Three drive modes are on offer, including Standard, Sport and Eco, and e-4orce models include an additional Snow mode) and the Ariya will also feature the e-Pedal one-pedal driving seen in the Leaf.

Design has been conceived to balance sport and luxury and includes “surprisingly” short overhangs, an aggressive roofline and large wheels. Full-body and two-tone colour combinations are on offer.

Onboard tech includes an enhanced version of the ProPilot package of driver assistance features, already seen in the second-gen Leaf and including lane keeping assistance and adaptive cruise control. The ProPilot with Navi-link also builds in road data and sensing technology to  help adjust vehicle speed based on the posted limit and upcoming road conditions, such as sharp bends. ProPilot Park is also available in certain markets and can help guide drivers with front, reverse and parallel parking.

Connectivity features include a new human-machine interface and firmware over the air updates. Nissan’s intelligent personal assistance technology features a hybrid voice recognition system with advanced natural language. Drivers can also use the NissanConnect smartphone app to pre-programme settings such as climate controls, while the Intelligent Key can be tailored to adjust lighting, the seat, steering wheel position and auto-sliding centre console based on the saved profile.

The display interface features both a 12.3-inch instrument monitor and 12.3-inch centre display. The Ariya also a full-colour head-up display said to be among the largest in the segment.

More details about Ariya’s availability and pricing in Europe and the UK will be announced in the coming months.