Next iPhone update to block distractions while driving

By Natalie Middleton / 4 years ago / Latest News / 1 Comment
Apple’s new iOS 11 update for the iPhone will bring a new feature to help fleets cut down on driver distraction. 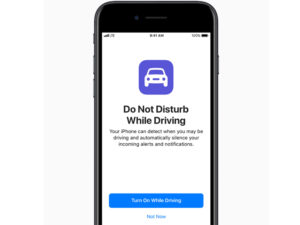 The Do Not Disturb While Driving feature on iOS 11 will enable the iPhone to detect when users are driving and silence notifications.

Revealed at the company’s worldwide developers conference in San Jose, California, the latest update will include a Do Not Disturb While Driving feature.

The functionality will enable the iPhone to detect when users are driving and automatically silence notifications to keep the screen dark and avoid the temptation to check the phone. Drivers will also be able to activate an auto reply feature for contacts listed in Favourites to let them know they are driving and cannot respond until they arrive at their destination.

Other new iOS 11 functionality – which will be able available to download in the autumn – includes updates to Apple Maps, which feature indoor maps for major airports and shopping centres, a more intuitive Siri personal assistant, a customisable dock and personalised top stories from Apple News.