Newly revealed Volkswagen ID.3 to deliver up to 340-mile range

Volkswagen has revealed its ID.3 electric hatch in production form, marking the first of its new generation of pure electric vehicles. 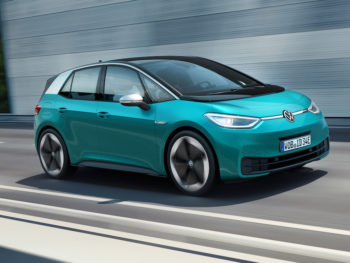 The Volkswagen ID.3 has made its world premiere at Frankfurt

The first in the new ID series of EVs – which later include the Roomzz concept and the smaller Crozz SUV, the Buzz van/MPV, the Vizzion saloon revealed at last year’s Geneva and the Buggy; all of which are also built on VW’s MEB Modular Electric Drive Matrix platform – the ID.3 is named to both mark its lower-medium segment status and herald its importance as the “third major chapter” for the brand following the Beetle and the Golf. It’s also the first model to wear the brand’s new logo.

Said to mark a new era for the brand, the ID.3 is also the brand’s first model to be carbon-neutral on delivery to customers while also introducing new features such as the Open Space concept, said to provide the model with more room than any other vehicle in its category.

It also heralds new digital display elements and controls, including a 10-inch central touchscreen that provides drivers with all key information and ID. Light functionality that uses an LED strip to warn drivers of dangers. All controls – including those on the electrically adjustable multifunction steering wheel – are operated using touch functions featuring touch-sensitive buttons; only the electric windows and hazard warning lights are still operated using tactile switches.

Full UK details are yet to be announced but three trim levels will be offered for the first edition, with entry-level features providing a navigation system, a DAB+ digital radio, seat heating and steering wheel heating, armrests at the front, a Mode 2 charging cable and 18-inch light-alloy wheels.

Previous: Number of rapid charge points to more than double by 2024
Next: Next-generation Jazz to go 100% hybrid in Europe