SEAT has revealed a more rugged take on its Ateca SUV with a new concept that will debut at the Paris Motor Show. 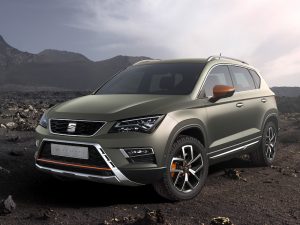 Although the standard model – which launched at the start of this month – is aimed at urban drivers, the Ateca X-Perience shows the model’s capabilities to address more demanding situations.

The exterior gains beefier styling, including an updated bumper along with a front diffuser, sump guard and fog light protectors along with chrome roof rails, a rear spoiler and mud flaps and high-profile tyres with bespoke 18-inch rims. The interior features suede upholstery, rubber mats, chrome detailing and ‘X-Perience’ branding.

More significant changes come under the bonnet. Powered by the top-of-the-range 187bhp 2.0-litre TDI and seven-speed paddle-shift DSG transmission from the standard Ateca, the show car gains the 4Drive traction system with a Haldex clutch set-up plus XDS traction control system. This enables the model to add two profiles for snow and off-road as well as Hill Descent Control to the SEAT Drive Profile alongside the Normal, Sport, Eco and Individual modes.

The concept will be used to gauge interest in a possible production model.

“The X-Perience is an exercise to show the Ateca family’s possibilities and potential in the future. We know that with the Ateca, we can go much further and it will be on display at the Paris Motor Show,” said SEAT vice-president of R&D, Dr Matthias Rabe. “With the Ateca X-Perience we can go beyond that which we already have in the series. It’s for the customer that wants to go further, taking it to the extreme, for weekend adventures, and of course, off-road.”