New cloud-based technology is being launched in the UK and globally to allow fleet managers to control the environmental impact of their individual drivers and curb their business carbon footprint. 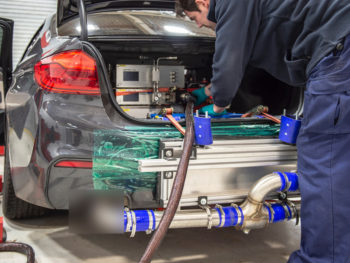 The tool uses verifiable algorithmic data to accurately measure and manage vehicle exhaust emissions in real time, initially for CO2 but with NOX output to follow

Developed by Emtec Corporation, Smart Fleet Cloud is a diagnostic tool that allows fleet managers to use the intelligence to accurately target and train errant drivers, or simply remove poor performing vehicles.

Developed with the help of global emissions experts and academics as part of the battle against climate change, the tool uses verifiable algorithmic data to accurately measure and manage vehicle exhaust emissions in real time. It currently measures CO2, but the next generation will also accurately capture NOX outputs.

“We are moving to a regime of transparency of greenhouse gas reporting as the government wants zero carbon generation by 2050.

“Apart from CAZ, under the Streamlined Energy and Carbon Reporting (SECR) regulations, businesses generating more than 40,000 kwh of energy will have to declare their emissions levels, which is why our solution is based on the maxim that a problem cannot be managed until it can be accurately measured.”

The business, founded in July 2017, has an international reach and remit, with a team of experts located in the UK, Europe and Kenya. Emtec is currently in the process of authenticating the CO2 algorithm in conjunction with the Millbrook testing facility and is working with the National Physical Laboratory to achieve the same validation.

Wedge added: “Climate change attributed to rising CO2 emissions is probably the single, biggest threat to the environment, but accurately measuring its impact has been part of the problem with the science lobby on one side of the argument and the climate sceptics on the other.

“Where there is agreement is that air quality from vehicle emissions is a perennial problem for urban areas, but how much of an issue is a moot point following recent scandals over data tampering in vehicle emission testing which served to negatively impact many vehicle manufacturers due to a perceived breach of trust.

“Having reliable fleet data means that they can drive their overall business decarbonisation strategy more effectively which is good news for the environment and the bottom line,” added Wedge.