New solution takes hassle out of tyre maintenance for fleets

A new retrofit tyre pressure management system (TPMS) has been launched to bring safety and cost-saving benefits for fleets – even on vehicles already fitted with OEM systems. 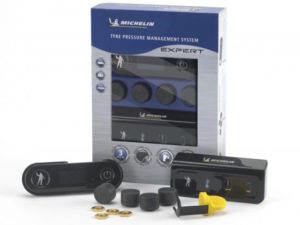 Developed by UK technology company Wheely-Safe and licensed by Michelin, the Wheely-Safe Light device has been developed to be both easy to fit and to provide more effective alerts than standard TPMS devices – which have been mandatory equipment on new passenger vehicles since 2014.

According to Wheely-Safe, original fit TPMS solutions will only warn once drivers have lost 25% of tyre pressure and have already suffered an impact on fuel efficiency. Instead, the Wheely-Safe Light device – which comprises a set of TPMS sensors to replace the traditional valve caps and a small solar-powered windscreen display – will provide a flashing light alert when tyre pressure goes down by 15% then an audible alert at 25%.

If drivers suffer a sudden loss of pressure, for example with a blowout, they’ll get an audible warning and all lights flashing so they know it’s an emergency.

The device can also sense any increase in tyre temperature – often the sign of an impending tyre blowout – and warn accordingly.

And the Wheely-Fit Light also includes a contactless tyre pressure checker which, when held next to the sensor, displays the exact pressure via the digital readout – without the hassle of connecting a pressure gauge to the valve.

It’s suitable for all cars and light commercial vehicles – Wheely-Safe will launch a combined TPMS and early-warning wheel loss sensor for heavy commercials later this year.

Steve Jackson, managing director of Wheely-Safe, said: “This is the perfect system for fleets as there are no batteries to change in the sensor or display unit, no cables to route and no complicated set-up. It’s literally plug-and-play and can be fitted by anyone in just a few minutes – with options available for linking it to on-board telematics systems.”

The sensors have in-built batteries with a projected life of 3-5 years and come with a 12-month warranty. Each pack of four sensors costs £89.95 (+ VAT) for a full kit, while additional pairs of sensors can be bought for £24.95 (+ VAT), for example to fit to trailers or more than four-wheel vehicles.