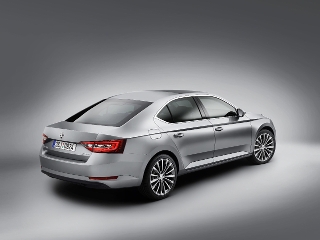 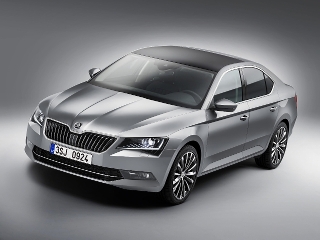 Set to go on sale in the UK in June, with deliveries starting from September, the third-generation model is based on the “SKODA VisionC” show car and is built on the VW Group’s MQB platform, with the estate model due to arrive later in the year.

The new model brings a striking design, with a bold grille and distinctive grille along with narrow pillars and a gently sloping roofline for a coupé-style profile

With an 80mm longer wheelbase and 61mm shorter front overhang, the new model benefits from enhanced packaging that offers increase space for front occupants as well as 157mm legroom in the rear – said to be about twice as much as in the nearest competitor model – and class-leading headroom.

Boot space is also said to top the segment with 625 litres of capacity – 30 litres more than in the second-generation Superb – and an electric tailgate is available with handsfree opening. Other practical features include a forward-folding front passenger seat and the ability to fold down the back seats from the boot.

In addition, the car features a rear-view camera for the first time.

Connectivity is also a key focus and there is a total of four, completely new infotainment systems based on Volkswagen Group’s MIB technology (Modularer Infotainment-Baukasten). The Columbus top model is optionally available with an integrated high-speed internet connection based on the LTE standard. This is a first for SKODA.

The new Superb also brings 29 “Simply Clever” features, of which 10 are brand new launches and 23 are new to the model. These include a mechanically retractable towing device, a tablet holder in the rear, a tablet storage compartment in the front centre armrest, a USB port and 230 V socket in the rear, cup-holders that allow single-handed opening for 0.5-litre bottles and an extra high-visibility vest storage compartment in all four doors. Both front and both rear doors will each hold a 1.5-litre bottle. New cargo fasteners secure loose objects in the boot. An ice scraper in the fuel filler flap is standard. In addition, there are new storage nets on the inside edges of the front seats, a removable LED torch in the boot and misfuel protection.

Engine line-up comprises five TSI petrol and three TDI common-rail diesels, all based on MQB technology and with Stop-Start technology and brake energy recovery as standard.

The most economical model is the Superb GreenLine, which offers a combined fuel consumption of 76.4mpg and emits 95g CO2 per km, helped by a 75kg weight reduction and improved aerodynamics.