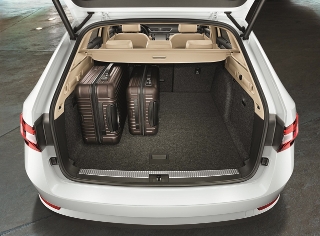 As previously announced, the new model will bring the largest, most practical boot in its class. Although the new model is only 23mm longer than its predecessor, the boot holds 27 litres more than before with the rear seats up and offers a maximum load capacity of 1,950 litres. Thanks to easily folding of the front passenger seat, the model can also accommodate objects of up to 3.10 metres in length.

In addition up to 31 Simply Clever features are on offer for the new model – 11 of which are in the boot alone.

As with the saloon version, the new estate is offers an optional, virtual pedal, which enables you to open the electric tailgate hands-free with a simple foot movement around the bottom of the rear bumper. The function works in combination with the KESSY keyless lock and start system.

Another new addition is the tip-to-close function that initiates the electric boot closing mechanism with a simple pull. When combining the electric bootlid with KESSY, the boot can also be closed by remote control.

Folding down the rear backrests can be done at the touch of a button in the boot of the new Superb estate.

The estate also brings a variably adjustable false boot floor that can also be used to house the boot’s new coat shelf and the retractable cover.

The boot also comes with four folding hooks, a number of storage nets and a removable LED torch.

The new Skoda Superb Estate goes on sale in the UK in July, ahead of first deliveries from September.