Land Rover has announced details of its forthcoming Range Rover Velar, which will provide a rival to models such as the Porsche Macan as well as the Jaguar F-Pace and BMW X4. 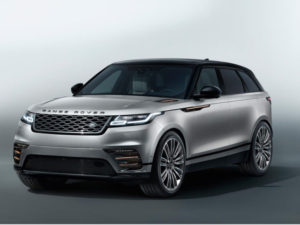 Velar will provide a vital plug for the gap between the Evoque and Range Rover Sport.

The fourth member of the Range Rover family, Velar will provide a vital plug for the gap between the Evoque and Range Rover Sport. It will be priced from £44,830 OTR with the entry-level 2.0-litre diesel engine, positioning it above the F-Pace, which is priced from £38,830 with the same drivetrain.

Built on Jaguar Land Rover’s IQ platform, also used for the F-Pace, at JLR’s Solihull plant, using an aluminium-intensive body, the Velar shares the same 2,874mm wheelbase but is slightly longer and narrower than the F-Pace. It also offers a 632-litre luggage compartment including a reduced-section spare wheel as standard.

Engine line-up bring six powertrains. The entry-level option is the 177bhp 2.0-litre Ingenium diesel with CO2 emissions from 142g/km – a 236bhp version of the same four-cylinder unit is also offered along with a 296bhp V6 diesel that delivers 516lb.ft of torque with CO2 emissions of 167g/km.

Petrols include the new 247bhp four-cylinder Ingenium petrol engine, with a 296bhp version to arrive later in the year, plus the range-topping 375bhp supercharged 3.0-litre V6 petrol engine.

All engines are married up to the ZF eight-speed automatic transmission and feature all-wheel drive.

The new model will live up to the Range Rover all-terrain promise, with ground clearance of up to 251mm, wading depth of up to 650mm and Land Rover’s suite of traction technologies including the optional Terrain Response 2 and All Terrain Progress Control. It also offers towing capacity of up to 2,500kg complemented by the optional Advanced Tow Assist function.

Suspension uses a double-wishbone front- and Integral Link rear set-up with air suspension as standard on six-cylinder models while Adaptive Dynamics damping technology is standard across the line-up along with the Torque Vectoring by Braking (TVB) system.

Customers can also specify Black and Luxury Exterior Packs. A First Edition model will also be on sale for the first model year, powered solely by the 3.0-litre V6 petrol and diesel engines.

The Range Rover Velar goes on sale in mid-July in the UK and Europe and in over 170 markets worldwide.