Land Rover has unveiled the second-generation Range Rover Evoque, which will introduce a new platform and styling along with mild hybrid engine tech from the outset and a plug-in hybrid version in the longer term. 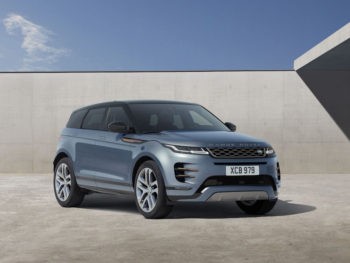 Available to order now, priced from £31,600, the latest model is the first in the carmaker’s line-up to be built on the new Premium Transverse Architecture, which brings similar dimensions but with extra interior space as well as increased luggage space, which runs from 591 litres to a maximum 1,383 litres.

Importantly, the new platform has been developed for electrification and enables Land Rover’s first use of mild hybrid technology. The 48V system is available across the line-up of Ingenium 2.0-litre petrol and diesel engines, bar the manual version of the entry-level 148bhp diesel – which is also the only front-wheel drive model. The technology stores energy normally lost while braking and uses it to assist the engine while accelerating. In addition, at speeds below 11mph (17km/h), the engine will shut off while the driver applies the brakes.

The result is improved efficiency; NEDC Correlated emissions start from 149g/km and with fuel economy from 50.4mpg for mild hybrid AWD versions while the FWD manual without mild hybrid tech starts from 143g/km.

A three-cylinder petrol Ingenium engine will also join the range next year along with a plug-in hybrid electric vehicle (PHEV) model based on the petrol unit but no details have been revealed.

The new Evoque also introduces latest off-road technology, including a second-generation Active Driveline with Driveline Disconnect technology to switch to front-wheel drive when cruising on motorways in order to save fuel. The Evoque also features the Terrain Response 2  technology first seen on the full-size Range Rover – which automatically detects the surface being driven on and adjusts the set-up accordingly – and can now wade through water up to 600mm (previously 500mm).

Onboard tech includes a ‘ClearSight rear-view mirror’ – billed as a segment first – that transforms into an HD video screen and displays what’s behind the vehicle.

It also features ‘world-first’ Ground View technology, which effectively makes the bonnet invisible by projecting camera imagery onto the upper touchscreen to show the driver a 180-degree view under the front of the vehicle.

The latest Evoque also features Apple CarPlay and Android Auto for smartphone integration. And it marks the first Land Rover with Smart Settings, which uses artificial intelligence algorithms to learn the driver’s preference and acts as ‘an onboard butler’ to adjust seat position, music and climate settings and even steering column preferences.

The Range Rover Evoque is available to order now and first deliveries are expected to start in the spring.

Previous: More than a third of cars still not WLTP-tested
Next: Andrew Cope joins Fleetondemand as executive chairman