The Škoda Kodiaq SUV has been updated for 2021, introducing a host of design and specification improvements along with new engine options and upgraded assistance systems. 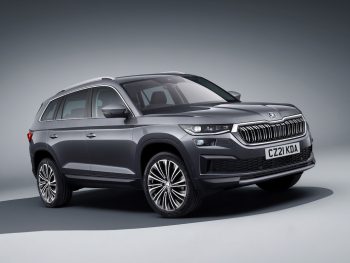 Engine options comprise three petrols and two diesels, all part of the new EVO line, which introduces new efficiency solutions, such as the ‘twin dosing’ method of exhaust gas treatment used in the diesel engines, which lowers nitrogen oxide emissions by some 80%, while fuel consumption on the petrols is reduced thanks to a higher injection pressure. Selected powertrains come with DSG transmissions and four-wheel drive.

The flagship engine is the new 245hp 2.0 TSI petrol used exclusively in the new vRS model; it replaces the previous 2.0 TDI and is 60kg lighter while the new DSG transmission is 5.2kg lighter than the previous gearbox. As before, the vRS model is fitted with four-wheel drive as standard – its pricing will be announced at a later date.

The rear gains an updated bumper, new spoiler and tail lights with LED technology, while interior updates bring a new two-spoke steering wheel as standard on all new Kodiaq models, with the SportLine and vRS variants featuring a sportier three-spoke wheel.

The new Kodiaq also benefits from extra driver assistance systems, including a new adaptive cruise control function and a new emergency braking function that can detect both pedestrians and cyclists. As part of the car’s proactive passenger protection, new radar sensors at the back can prepare the vehicle and its occupants for the risk of a collision from behind.