Land Rover is targeting increased user-chooser volume with the new Discovery; the first version with a four-cylinder diesel engine, offering CO2 emissions from 171g/km and a reduced entry price. 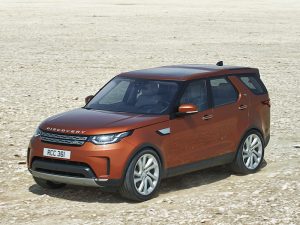 Unveiled ahead of the Paris Motor Show and on sale next spring, the first all-new version since 2004 replaces a model which enjoyed mainly utilitarian fleet success in the UK, its company appeal limited by the single six-cylinder engine and 203g/km CO2 emissions.

The new Discovery is longer, lower and narrower than its predecessor, and features an aluminium-rich monocoque chassis similar to Jaguar Land Rover’s latest large vehicle lines, contributing to significant weight savings over the ladder frame used in previous generations.

Reductions in weight have enabled a broader engine choice without compromising performance. The range entry point will be a 237bhp version of the 2.0-litre diesel engine from the Discovery Sport, carrying an entry price of £43,495.

That’s around £3,500 less than the lowest-priced version of its predecessor, and undercuts four-cylinder diesel engines in the Audi Q7, BMW X5, Mercedes-Benz GLE and Volvo XC90.

Although most UK cars will still use the six-cylinder diesel, UK managing director Jeremy Hicks sees most conquest volume coming from the new engine, particularly in fleet.

All versions feature an eight-speed automatic gearbox and four-wheel drive, with air suspension standard across the range. The new Discovery accommodates seven adults, reduces its ride height 40mm for easier access and has smartphone-controlled seat folding. Wading depths and ground clearance have increased and, although the tailgate is no longer split horizontally, there’s a fold-out seat to retain the functionality this offered.

“[The new engine] puts us in a really good position from a fleet and business point of view,” said Hicks. “Discovery plays really well to the core DNA of Land Rover, which is all about capability and versatility. The core customer base won’t change – we’ll see incrementality from user-chooser and competitor vehicles coming across.”

It arrives on the back of growing corporate sales, Hicks added: “We’ve seen significant growth in fleet and business sales [this year], driven by XE, XF and Discovery Sport and Evoque. The common denominator is Ingenium engines; we’ve got ourselves to a good, competitive position on CO2 and whole-life costs. We’re having a record year with Evoque and a lot of that improvement is down to fleet and business sales.”

Previous: Ford Mustang to show parsimonious side in 2016 MPG Marathon
Next: Dynniq rebrands vehicles as part of major fleet overhaul