Kia has revealed the new Sportage, which launches later this year with a radically reinvented interior and exterior design. 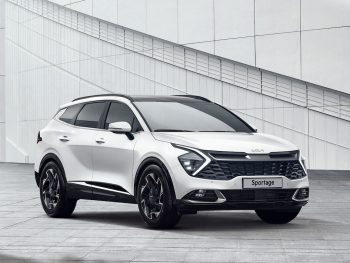 Now in its fifth generation, the Sportage will include a dedicated European version for the first time in its 28-year history.

Exterior design takes inspiration from the new EV6 electric crossover and, like the latter, is based on the brand’s ‘Opposites United’ design philosophy.

The result is a dynamic new styling using Kia’s modern signature Tiger Nose and distinctive boomerang-shaped headlights at the front end and a spoiler and razor lamps at the rear. The Sportage will also be available for the first time with a contrasting black roof and an X-Line variant featuring bolder styling outside and signature sage green or black seating, quilting and black metal wood on the inside.

“With the all-new Sportage, we didn’t simply want to take one step forward but instead move on to a different level in the SUV class,” said Karim Habib, senior vice president and head of Kia’s Global Design Center.

The interior is also focused on a bolder approach, employing quality materials, high-tech features and contemporary style. It’s focused around an ergonomic layout and a panoramic curved display including a touchscreen and centre console finished with a high-end gloss and soft-touch switches.

No powertrain details have been revealed at this stage.

More info on the Sportage and the European variant will be released in September 2021.