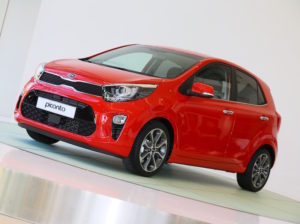 Making its debut at the Geneva Motor show, the third-generation model will be offered in five-door format only, in line with increasing market demand, with three petrol engines available.

The updated entry-level 66bhp 1.0-litre unit will offer enhanced efficiency. In Europe, which gets a four-seat model, official CO2 emissions fall to 89g/km, down from 95g/km on the outgoing model, but figures for the five-seat version, the only model available in the UK, have not been released.

The line-up also includes an updated 83bhp 1.25-litre unit while at the top of the range sits a new 99bhp 1.0-litre turbocharged gasoline direct injection (T-GDI) – marking the first time this Picanto has offered a turbocharged petrol engine as well as being the most powerful engine ever offered in the model.

Refinement has been dramatically improved in the new Picanto, with a range of modifications and Kia says the model offers the quietest cabin of any A-segment model.

The new Picanto will also offer more cabin and cargo space despite retaining its 3,595mm length, thanks to a longer wheelbase and shorter front overhang. Boot space grows from 200 litres to a class-leading 255 litres, rising to 1,010 litres with the 60:40 split-folding rear seats down. It also features a two-step floor, which can be raised or lowered by 145mm.

Kia has engineered the latest Picanto for a more comfortable ride, with a series of modifications to the suspension – independent by MacPherson strut at the front; torsion beam at the rear – to bring about greater ride stability and quicker. The Picanto also features quicker, more responsive steering and becomes the first car in its class to offer buyers torque vectoring by braking – giving a higher degree of handling stability and security under cornering, while helping to reduce understeer during harder cornering.

Exact specification details haven’t been released but Kia has announced a new ‘GT-Line’ specification based on the company’s higher-performance ‘GT’ models, such as the Optima GT. The Picanto GT-Line brings red, silver and black exterior highlights as well as chrome-tipped twin exhausts.

The new Picanto will also offer greater customisation potential, with a choice of 11 vibrant paint finishes and four aluminium alloy wheel designs. Buyers can also personalise their new Picanto with one of five optional colour packs for the interior.

Technologies available will include a ‘floating’ 7.0-inch HMI touchscreen with a navigation system with 3D map and offering Apple CarPlay and Android Auto. A rear-view parking camera with dynamic guidelines is also on offer along with an optional wireless smartphone charger and USB port. Safety technologies include Autonomous Emergency Braking (AEB).

The new Picanto will go on sale from the start of Q2 2017 following its debut at Geneva.