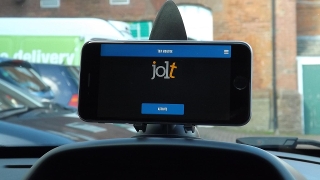 The driver element is free of charge and can be installed on any smartphone and does not require additional storage space.

The driver simply downloads JOLT, then inputs their unique insurance policy number, presses activate and places the smartphone into the windscreen mount. When the driver is involved in an accident, the software records a video of the incident as well as supporting data such as collision impact speed, the trajectory and movement of a vehicle post impact, plus a suite of other data including third party details such as witness statements.

This data is then collected by a team at JOLT HQ and compiled into a package of information that allows insurance partners to see who is at fault. Algorithms and bespoke software turn the data into a format that auto-populates the insurance claim form. The claim is with the insurance company within minutes of the collision.

“The original concept of JOLT came to me following a minor road traffic accident. The incident should have been relatively simple to deal with but the other driver decided to claim it wasn't his responsibility despite us both knowing that wasn't true. The claims process proved to be incredibly frustrating. It took far too long and the system they were using seemed far too archaic,” commented Mark Robinson, the mastermind behind the JOLT technology.

“We started to think about ways in which the process could be improved. What we've developed is a platform that harnesses the power of an individual Smartphone. I believe what we've created is a proposition that will reduce insurance fraud by an order of magnitude whilst speeding up claims and reduce driver frustration.”

JOLT was tested in collaboration with the Collision Investigation Unit (CIU) of Cumbria Constabulary. A number of slow- and high-speed impacts from various angles were tested, the police unit fitted data loggers and in car observation cameras to each of the vehicles. Following each accident the police team conducted a forensic examination of the incident to ensure data comparisons between the various technologies could be undertaken, thus providing confidence in all outputs.

JOLT allows drivers to manually log incidents involving third parties or dangerous driving by another motorist. The app has the additional safety feature of being able to notify emergency services of the driver's location within moments of any accident.

The software managing the administration and reporting element allows the platform to be used by any sector including fleet operators and car manufacturers. A managed service to fleet operators will be incorporated during phase two of the UK launch.