The Škoda Karoq, Kodiaq and Superb are getting a new-generation infotainment system as part of model year updates, bringing a range of extra connectivity features. 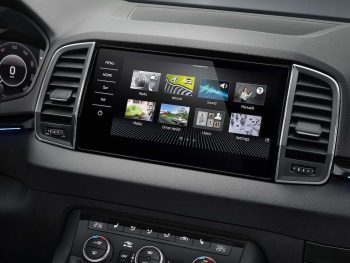 Based on the Volkswagen Group’s third-generation modular infotainment matrix, the new tech brings the latest digital voice assistant, known as Laura, plus other online features including internet radio and wireless SmartLink technology.

It also introduces enhanced personalisation options, allowing an increased number of custom settings to be transferred to other Škodas, for example within a company car fleet.

The changes also introduce upgraded touchscreen options. The entry-level Bolero infotainment and mid-range Amundsen navigation systems each get an 8-inch touchscreen, while the range-topping Columbus navigation variant features a 9.2-inch screen. Updates are carried out over the air and drivers using Amundsen and Columbus systems can create a Škoda ID account directly from the vehicle. The latter two systems will also pick up online radio stations too; as with Scala and Kamiq models equipped with Amundsen navigation.

The new functionality is enabled by a built-in SIM card that ensures a permanent internet connection, which also enables Infotainment Online services to be used using a data allowance provided by Škoda.

The models also get the latest USB-C ports – instead of the former USB-A – as standard and a USB-C above the rear-view mirror is now optional, enabling use with systems such as dashcams and also available in Scala and Kamiq models.