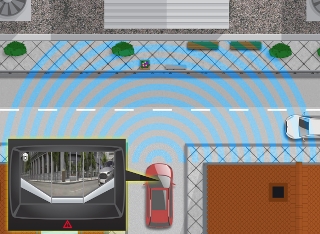 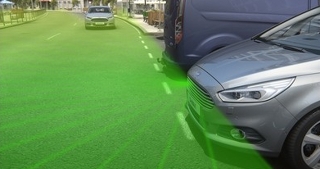 The Front Split View Camera – now available as an option in the all-new Ford S-MAX and Galaxy – displays to the driver a 180-degree view from the front of the car, using a video camera in the grille. At a blind junction or exiting a driveway, the camera enables drivers to easily spot approaching vehicles, pedestrians or cyclists.

“We have all been there and it’s not just blind junctions that can be stressful, sometimes an overhanging tree, or bushes can be the problem,” said Ronny Hause, engineer, Driver Assistance Electronic Systems, Ford of Europe, whose team worked closely on the project with their US counterparts. “For some, simply driving off their own driveways is a challenge. Much like rear-view cameras, Front Split View Camera is one of those technologies that people will soon wonder how they managed without.”

The technology is activated at the push of a button. A 1-megapixel camera in the front grille enables drivers to see a real-time 180-degree view – both left and right – on the vehicle’s 8-inch colour touchscreen. Drivers can track road‑users that approach on either side and pass in front of the vehicle. The camera, just 33 millimetres wide, is kept clear by a specially designed retractable jet-washer that operates automatically when the windscreen wipers are activated.

“From sunrise to sunset we tested the Front Split View Camera on all kinds of roads, congested urban streets and areas with a lot of cyclists and pedestrians,” Hause said. “Tackling tunnels, narrow alleys and garages in all light conditions also meant we could ensure the technology worked well even when sunlight was shining directly into the camera.”

The new Front Split View Camera system is available to order as a £400 option on the new Galaxy and S-MAX, and also will be offered on the all-new Ford Edge upscale SUV, available in Europe later this year.