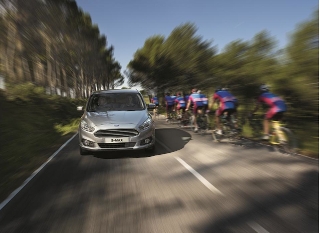 The new model also marks the introduction of new 1.5-litre EcoBoost petrol and 207bhp bi-turbo 2.0-litre TDCi engines, with CO2 emissions reduced by up to 7%.

Priced from £24,545, the new seven-seat model is based on the Mondeo platform and brings a sleek and sporty profile with a lower roofline, slim-line lights and a more dynamic stance.

It will also be the first Ford worldwide to offer Intelligent Speed Limiter, a new technology that scans traffic signs and adjusts the throttle to help drivers stay within legal speed limits and avoid fines.

Intelligent Speed Limiter allows drivers to set a speed tolerance of up to 5mph above the detected speed limit. The system does not apply the brakes but smoothly controls engine torque by electronically adjusting the amount of fuel delivered. If the S-MAX overruns the set maximum speed because of a downhill gradient, an alarm is sounded. Drivers can temporarily override the system by pressing firmly on the accelerator.

Other new technologies include Glare-Free Highbeam, which retains maximum illumination for other areas. The technology works in conjunction with Ford Dynamic LED headlights with Adaptive Front Lighting System, which can adjust the headlight beam angle and intensity to one of seven settings according to speed, ambient light, steering angle, distance to the vehicle in front and windscreen wiper activation.

A further new development is the Ford Adaptive Steering, which will make it easier to manoeuvre at low speeds and in tight spaces, and provides a more precise and intuitive feel at high speeds.

The S-MAX also debuts new safety technologies, including the Front Split View Camera, which displays in the cockpit the 180-degree view from a camera installed within the grille.

Pre-Collision Assist with Pedestrian Detection technology also is first to segment. This system is designed to detect people in or near the road ahead, or who may cross the vehicle’s path, and can automatically apply the brakes if a potential collision is detected and the driver does not respond to warnings.

Pre-Collision Assist scans ahead for vehicles, too, and if an imminent collision is detected it can automatically apply up to full braking force to help the driver mitigate or avoid many types of rear-end collision.

The 148bhp and 178bhp 2.0-litre TDCi S-MAX models will be offered with Ford’s six-speed PowerShift automatic gearbox and are available with Intelligent All-Wheel Drive, which also enables towing up to 2,000kg.

Interior features also include an optional driver-facing 10-inch digital screen with animated analogue-style instrumentation along with an eight-inch high-resolution touchscreen in the centre console that enables drivers to control Ford SYNC 2 with Voice Control to operate phone, entertainment, climate and navigation systems.

And the S-MAX will for the first time be offered with the Hands-Free Liftgate that can be opened or closed using a kicking motion beneath the rear bumper. Customers will also be able to specify Ford’s Electric Retractable Tow Bar with Trailer Sway Control.

First deliveries of the new model are due in the summer.