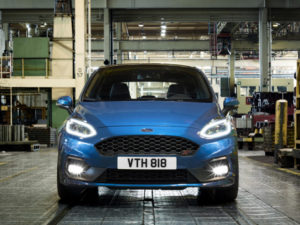 Fiesta ST will be the first ever Ford Performance model powered by a three-cylinder engine.

Making its global public debut at the Geneva Motor Show, the third-generation Fiesta ST will be the first ever Ford Performance model powered by a three-cylinder engine.

Part of the Ford’s EcoBoost range of petrol engines, which also includes the 1.0‑litre EcoBoost, the new unit uses technology including turbocharging, high-pressure fuel injection and Twin-independent Variable Cam Timing to deliver optimised performance and fuel efficiency, delivering 214lb.ft of torque and an anticipated 0‑62mph time of 6.7sec. In addition, cylinder deactivation technology will help bring about anticipated CO2 emissions of 114g/km. This compares to the entry-level CO2 of 138g/km for the current three-door Fiesta ST. Fuel consumption data will be announced at a later date.

The new Fiesta ST will also be offered with a greater variety of interior trim and personalisation options than ever before, including new styling packs, and will also offer SYNC 3 connectivity with eight-inch touchscreen and B&O Play high-end audio.

The Fiesta ST is available from launch in early 2018 in both three-door and five-door body styles. Pricing will be announced closer to launch.