A new electric delivery vehicle prototype that could cut emissions for couriers has been unveiled this week. 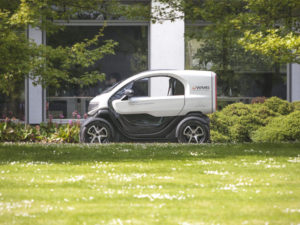 Developed by teams at Warwick Manufacturing Group (WMG), University of Warwick and Warwickshire-based design company Astheimer, the Deliver-E driveable concept’s platform is based on a Renault Twizy and offers an enlarged rear storage area, as well as a 48V 6.5kWh battery system that increases the Twizy’s peak power from 12 to 36 kW (16 to 48 Bhp).

The power was increased in order to cope with heavy loads, according the the developers.

The battery system is the first module produced by WMG’s new automated battery production line for electric vehicles, developed as part of the Automated Module-to-Pack Pilot Line for Industrial Innovation (AMPLiFII) project, which was launched by WMG to create a UK supply chain for fully qualified battery packs to suit hybrid and electric vehicles across a broad range of markets.

The concept vehicle will be used as a demonstrator at a number of events through the year, alongside its primary role to be used for research purposes by WMG and collaborative partners.