UK new car registrations saw a major rebound in July, aided by pent-up demand and the reopening of dealerships across the nation. 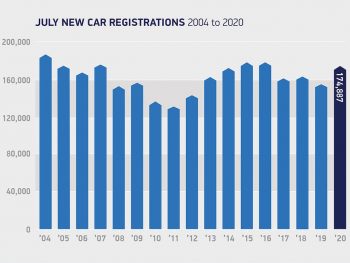 July’s figures show the car sector rallied, with a boost from demand pent-up from earlier in the year and some attractive offers

New figures from the Society of Motor Manufacturers and Traders (SMMT) show total new car registrations last month rose to 174,887 vehicles, up 11.3% year-on-year and driven particularly by retail buyer demand; private registrations were up 20.4% to 79,929.

While there’s been no government support for new car sales, the SMMT said carmaker incentives had helped spur registrations – eight of the 10 major manufacturers provided attractive finance offers and flexible payment terms. But it’s also believed that pent-up demand is a key reason for the rise.

Appetite for EVs is also a key factor; while diesel registrations fell 25.9% in June and petrol held steady at 0.3%, demand for fully electric vehicles was up 259.4% to 8,162 units – giving a 4.7% market share compared to 1.4% a year ago and very likely helped by the 0% Benefit-in-Kind for the current tax year.

Year-to-date new car figures give a more sobering picture; fleet sales have fallen 45.0% compared to the first seven months of 2019 while overall registrations are currently down 41.9% and are expected to be 30.0% down by end of 2020, totalling £20bn in lost sales and putting one in six UK auto industry jobs at risk.

And with the SMMT having reported last week that car production output fell 42.8% in June, chief executive Mike Hawes said there is still much uncertainty about the future.

“By the end of September we should have a clearer picture of whether or not this is a long-term trend. Although this month’s figures provide hope, the market remains fragile in the face of possible future spikes and localised lockdowns as well as, sadly, probable job losses across the economy. The next few weeks will be crucial in showing whether or not we are on the road to recovery,” he continued.

Michael Woodward, UK automotive lead, Deloitte, also acknowledged the need for caution with the figures. “This flurry of post-lockdown activity hints towards a speedy recovery,” he outlined. “However, manufacturers and dealers alike will treat these results with caution. The conversion of latent demand, built up over the last four months is a key driver of July’s growth, but we may see a slower rate of sale return over the course of the year once this demand dissipates.

“Whilst consumer confidence is returning, albeit slowly, consumers remain concerned over the state of the economy and the job market. As a result, consumers may be more cautious over major purchases moving forward. However, significant discounting is likely over the coming months as manufacturers bring their factories back up to full capacity. This could help maintain higher level of sales, at least in the short-term.”

He also pointed to the significance of electric vehicles in market recovery.

“Whilst the UK remains one of the only major economies not to have provided an auto stimulus package in response to Covid-19, there are already significant tax incentives in place for electric vehicles. These incentives seem to be working and, combined with greater consumer awareness on climate change, the EV market continues to grow rapidly, continuing a trend of triple digit growth that was only interrupted at the height of lockdown.”

While a third of global new car sales are expected to be electric by 2030, proposals in the UK to bring forward a ban on diesel and petrol new car sales by 2035 or earlier, could see the nation surpass this. Helped also by continued investment in charging facilities and overcoming consumer concerns around their availability and accessibility, the UK could see EVs account for as much as 65% of the domestic market in the same period, according to Deloitte.

“With a stream of new EVs entering the market with improved ranges, sales figures for petrol and diesel vehicles are likely to have reached their peak. Pressure is now on fast-chargers with capacity being tested at peak times. Maintaining coordination with charging infrastructure planning is needed if growth is to be sustained.”

Alex Buttle, director of car selling comparison website Motorway.co.uk, also urged for an increased focus on EVs as he said the Prime Minister should take note of the strong growth in electric car sales.

“If there was ever a time for Boris to show more support for the electric switchover, and better incentivise people to switch to electric, it’s now. With buying confidence low, many consumers need more reasons beyond environmental ones to buy a new greener vehicle at the moment,” he stressed.