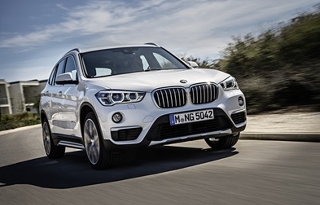 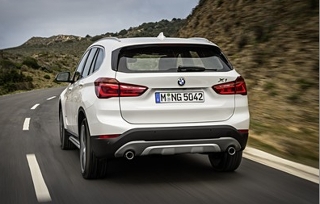 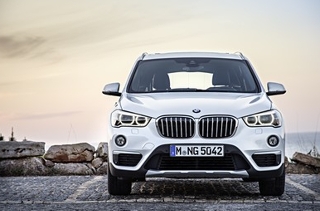 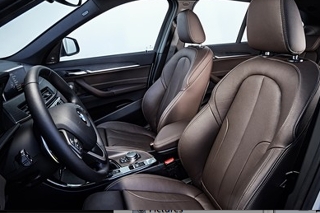 Based on a new platform, the new model replaces the previous longitudinally mounted engines with new front/transverse-mounted four-cylinder units and a newly developed BMW xDrive intelligent all-wheel-drive system or front-wheel drive configuration, depending on the model variant.

At 4,439mm long, 1,821mm wide and 1,598mm tall, the new model is 36mm shorter but 21mm wider and 53mm taller than its predecessor and also brings a 90mm longer wheelbase. As a result interior space is up along with boot capacity, which stands at 505 litres – up 85 litres on the first-generation X1 – rising to 1,550 litres with the standard 40:20:40-split rear seat folded. A 60:40-split rear bench is optionally available that can slide forward or back by up to 13cm. The rear backrests can now be folded electrically using a button in the boot area. As an option, the front passenger seat backrest can also be folded down. Hands-free tailgate opening and closing is also included within the Comfort Access option.

Exterior design changes bring it in line with the rest of the BMW family and see changes to the grille and headlights as well as the adoption of LED daytime running lights.

The interior feature a driver-facing instrument panel and centre console along with a 6.5-inch or, optional, 8.8-inch freestanding monitor for the iDrive operating system's Control Display while navigation is standard on the new X1, as it is on all BMWs from September onwards.

The new BMW X1 will be available from launch with one petrol and three diesel units – each with 2.0-litre displacement and BMW TwinPower Turbo technology – with other units to follow.

The diesel line-up is completed with the 228bhp xDrive25d – the most powerful four-cylinder diesel ever fitted in a BMW – which accelerates the X1 from 0 to 62mph in 6.6 seconds, with an average fuel consumption of 56.5mpg and CO2 emissions of 132g/km.

The X1 also gains an updated version of the xDrive intelligent all-wheel-drive system designed to be lighter and more efficient, and also features a completely revised chassis that now comprises single-joint strut suspension at the front and a multi-link rear axle.

The new BMW X1 is equipped as standard with Servotronic speed-sensitive steering assistance, while a new item on the options list is Variable Sports Steering. M Sport suspension is also available as an option, featuring firmer spring and damper settings and a 10mm lower ride height. And the X1 will be offered for the first time with the option of BMW's Dynamic Damper Control system with the choice of two settings using the Driving Experience Control switch.