BMW has unveiled the new 3 Series Touring, which has been designed to offer increased interior space, improved handling and also heralds the model’s first plug-in hybrid. 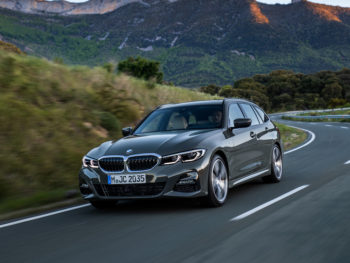 The sixth-gen 3 Series Touring line-up brings SE, Sport and M Sport (pictured) grades along with an exclusive M Sport Plus Edition in the UK

Available to order from 14 June, with customer deliveries from 28 September, the sixth-generation estate arrives some six months after the saloon (see road test here) and continues to play a vital role in the line-up, despite growing SUV take-up. Since its launch in 1987, more than 1.7 million examples of the 3 Series Touring have hit the roads, of which the previous generation accounted for more than 500,000 units.

The latest model brings larger exterior dimensions than its predecessor, providing more space in the front and rear, while the 500-litre boot – five litres larger than before – is wider with a slightly lower loading sill. Boot capacity expands to offer a maximum capacity of 1,500 litres.

Automatic tailgate operation is once again included as standard and the optional Comfort Access system allows hands-free opening and closing, too. The rear window opens separately, including through remote operation, while the flexible luggage compartment cover and the boot partition net can be removed and stored in specially designed compartments underneath the boot floor.

Options also include an electronic tow bar and the maximum trailer load is 1,600kg for the new BMW 320i Touring and 1,800kg for all other model variants.

Engine line-up covers a range of petrol and diesel engines with either four or six cylinders and BMW TwinPower Turbo in the petrol versions. The range brings 184hp 320i, 258hp 330i and 374hp M340i xDrive petrol variants, with emissions ranging from 133g/km to 170g/km while official WLTP fuel economy runs from 37.7mpg to 48.7mpg.

The 320d and 318d models get the latest-generation six-speed manual gearbox as standard, with the most recent version of the eight-speed Steptronic transmission available as an option and standard on the other model variants.

A plug-in hybrid drive is due to join the model line-up in summer 2020, comprising a four-cylinder petrol engine and electric motor with eight-speed Steptronic transmission. System output is up to 292hp when using the new XtraBoost mode. Combined fuel consumption is 122.8-156.9mpg with CO2 emissions of 52-42g/km (provisional figures). Boot space does take “a slight reduction” from the battery positioning but BMW has not confirmed how much.

Trim levels will bring SE, Sport and M Sport grades in the UK along with an exclusive M Sport Plus Edition.

Prices for the UK will be confirmed closer to its on-sale date.