SEAT’s new Ateca SUV has become the best performing SEAT model in history for a residual value forecast from CAP. 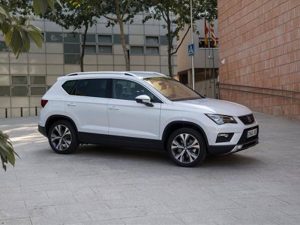 The automotive data expert has announced that the new model, the brand’s first SUV, is anticipated to retain 52.6% of its value on average across the range after three years/30,000 miles, with RVs rising to up to 59% depending on the model.

SEAT UK director, Richard Harrison commented: “The news for Ateca just keeps getting better and better. Only two weeks ago, it was named Best Crossover in the Auto Express New Car Awards 2016, and now we’re celebrating an RV forecast just shy of 60%. Mind you, it really is a great all-round proposition, with substance to back up its undeniable style. That probably goes a long way to explaining why it’s already generating the highest level of interest we’ve ever seen for a new SEAT model in the UK.”

The new Ateca is available to order now ahead of its official launch on 9 September. Prices start from £17,990 OTR.