The Department for Transport should adopt new ways of reviewing casualty data to provide a more balanced viewpoint on road danger risks, according to the Parliamentary Advisory Council for Transport Safety (PACTS). 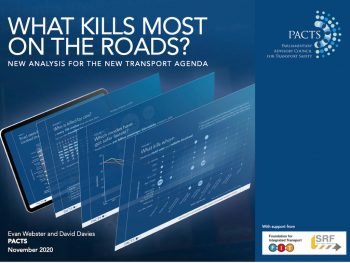 PACTS’ analysis of existing road deaths data shows most people who die on the roads are much more likely to be killed in a car, or by a car, than any other mode

A new report by the Government’s safety advisors says there has been very little reduction in UK road deaths or serious casualties since 2010 when national targets for casualty reduction were abandoned, and calls on the Government to “step up its ambition and actions” in line with its recent endorsement of the UN resolution on improving global road safety, and the target to reduce global road deaths by 50% by 2030.

The authors say that the Government has shown strong support for active travel while also spending considerable sums to maintain public transport services, driven in part by Covid-19, but making road users safer – and feeling safer – is a crucial part of delivering this new transport agenda.

Published this month, the PACTS report on ‘What kills most on the roads? New analysis for the new agenda’ says that traditional analysis emphasises the victims of road collisions, particularly vulnerable road users – pedestrians, cyclists, motorcyclists and horse riders. It can lead to the simple conclusion that these road users are “dangerous” and “the problem”, and that road safety relates predominantly to these users.

Providing a different picture, the new analysis by PACTS, of road deaths in Great Britain in 2019, shows the danger associated with different modes of transport and the total deaths involved with travel by each mode.

The data reveals that most people who die on the roads are much more likely to be killed in a car, or by a car, than any other mode. By contrast, pedestrians and cyclists are rarely involved in collisions that result in the death of other road users.

But when looking at per mile travelled, vans and light goods vehicles are involved in more deaths of other road users than any other vehicle type, more even than HGVs. Motorcycles have the highest user fatality rate.

While the findings seem fairly obvious on some levels, the PACTS report stresses that analysis which assesses the overall risks involved with different modes of transport, including the risks posed to others, can provide additional insights into the nature of road safety and the priorities in relation to danger reduction and promoting active travel.

Executive director David Davies said: “We hope the DfT will include this form of analysis in its future publications, leading to a better understanding not only by experts but also by politicians and media of the sources of road danger and how forward-thinking polices on active travel can be achieved in parallel with ambitious road safety objectives.”

Other recommendations for the Government include adopting national targets to reduce the numbers of people fatally and seriously injured, in line with the global ‘50 by 30’ target that’s been endorsed. Road safety targets have long been called for by motoring organisations and PACTs says trends in the casualty rates for individual road user groups should be monitored and targets considered.