Mayor of London, Sadiq Khan is introducing new air quality alerts, including road-side messages that will ask stationary drivers to switch engines off. 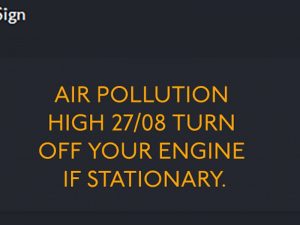 The new alerts, which will be joined by pollution warnings at bus stops and Tube stations across the Capital, will become effective from 15 August and are being implemented as the Mayor finishes an initial consultation on a comprehensive package of measures to clean up the Capital’s air, including new charges for the oldest most polluting vehicles entering central London from 2017, an expanded Ultra Low Emission Zone, and a diesel scrappage scheme.

Nearly 15,000 people responded to this consultation, which closed on Friday 28 July, and 79% of respondents stated that they wish to receive information when air pollution is high or very high so that they can take action to protect their health and reduce its impact.

Mr Khan said: “I believe that Londoners have a right to know about the quality of the air that they breathe. These new alerts will allow them to take precautions and help them plan ahead to avoid the worst instances of air pollution.

“I am doing everything within my power as Mayor to put the health of Londoners first. I hope that these alerts will become less and less frequent as we take steps to make our already great city a cleaner place to live, work and study in.”

The Mayor of London’s Press Office added that a further more detailed consultation on the proposed air quality measures will take place later this year and some measures could be implemented as early as 2017.