New Audi A6 introduces A8 innovations

Audi’s eighth-generation A6 will cascade new technology seen on the A8 when it launches this summer. 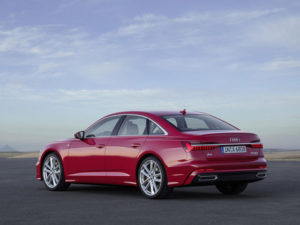 Taller, longer and wider than its predecessor, the new model gets just a subtle make-over of its styling, with more intensive upgrades when it comes to features.

Onboard technology includes the latest version of the all-digital MMI touch response infotainment system, which is accessed via two screens and brings more intuitive operation and personalisation options. Head-up display is available too and drivers can also use natural-language voice control to access onboard stored data and – in conjunction with MMI navigation plus – data from the cloud. Audi connect online services will also provide car-to-X services traffic sign and hazard information.

Drivers can also opt for a new Audi Connect ‘smart’ key to lock and unlock the car and start the engine, operated via an Android smartphone, and there’s also an autonomous parking pilot system for manoeuvring in and out of public parking spaces and garages.

European engine line-up from launch brings two 3.0-litre V6 engines: a 335bhp TFSI petrol with official CO2 emissions from 151g/km and a 282bhp TDI diesel with CO2 emissions from 142g/km. All units will use mild hybrid technology seen on the A8, enabling the A6 to coast between 34mph and 99mph on electrical power. The 3.0 TDI unit is paired with an eight-speed tiptronic and the 3.0 TFSI with a seven-speed S tronic, and both come with quattro all-wheel drive as standard.

Audi has also confirmed that a 228bhp 3.0 TDI will launch at a later date, as will a four-cylinder 2.0 TDI with 201bhp. Dates are yet to be confirmed. Despite rumours of a PHEV option, Audi said nothing has been confirmed.

The A6 also features progressive steering with the option of dynamic all-wheel steering to improve responses.

Pricing and specification will be confirmed nearer to launch.