By Alex Grant / 2 years ago / Top Stories / No Comments

Mercedes-Benz is to extend its small car line-up to eight model lines, likely to include an A-Class saloon and an electric vehicle, as it focuses on broadening its appeal and finding a younger customer base. 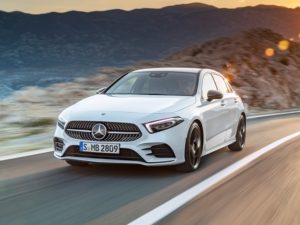 The new A-Class hatchback, which goes on sale in the UK in March, replaces a model which has been particularly successful for introducing the brand to new customers. In Europe, 60% of A-Class customers are conquests from other brands, and the average age is 10 years younger than it was for the MPV-shaped previous version.

During its runout year in 2017, the outgoing model was the UK’s tenth most popular car. With 43,717 registered, it accounted for almost a quarter of Mercedes-Benz’s total 180,970 passenger car registrations, and was only 758 units behind the total for Fiat’s entire model range.

It’s also one of five model lines on the compact car platform, alongside the B-Class, CLA, CLA Shooting Brake and GLA, collectively accounting for 620,000 units, or over a quarter of the brand’s global volume, during 2017.

Mercedes-Benz said this small car family will soon grow to eight models, hinting that the Concept A Sedan could preview a three-box A-Class to rival the A3 – particularly important in North America – while the Concept EQA shows how the brand’s electric vehicle sub-family could become part of the line-up too.

The new A-Class shows what to expect from them; it gets the latest driver assistance technologies from the E-Class and S-Class, an optional all-digital floating instrument and infotainment display, more intuitive voice controls and connected navigation which can receive live data from other vehicles’ on-board sensors.

Mercedes-Benz has also responded to customer feedback from the old car, with visibility improvements, a larger-capacity boot accessed via a wider tailgate opening, and new comfort suspension fitted as standard to improve ride quality.

From launch, the A-Class will be available with a new 161bhp 1.4-litre petrol engine with cylinder shut-off (55.4mpg, 120g/km), and a upgraded 115bhp 1.5-litre diesel (68.9mpg, 108g/km), now featuring selective catalytic reduction, both of which feature seven-speed dual-clutch automatic transmissions. Other engine and transmission options, including four-wheel drive, will be available later in the year.

Dieter Zetsche, Chairman of the Board of Management of Daimler AG and Head of Mercedes-Benz Cars, said: “The A-Class has been a big driver of change at Mercedes-Benz. It is the single best example on how we managed to rejuvenate our entire brand. There’s not much of an ‘entry-level’ feel left in our new entry-level car.”