New 20mph speed limits on all Transport for London roads in central London could catch drivers out from next week – with enforcement being carried out by a dedicated Metropolitan Police team. 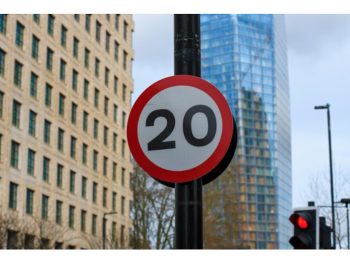 The new speed limits will kick in from Monday 2 March 2020 across some 5.5 miles of TfL roads within the Congestion Charging Zone – including Millbank, Victoria Embankment and Borough High Street.

Their introduction forms part of the Mayor’s Vision Zero commitment to eliminate death and serious injury from London’s roads – speed is a factor in around 37% of collisions in London where a person dies or is seriously injured – and follows strong public support for the proposals.

New signage and road markings will alert drivers to the 20mph limits but TfL warns that it’s recalibrating all the speed cameras in central London and will work closely with the Metropolitan Police to ensure that drivers are complying with the new safer speed limits.

Andy Cox, Metropolitan Police detective superintendent, said: “Safe speeds are key to achieving the Vision Zero ambition and it’s vital that those driving or riding on our roads respect the law on speed limits. We will actively target speeding and dangerous drivers and ensure they are dealt with robustly.”

The changes mirror the lower speed limits already in place across many borough roads in central London; ongoing work by the Mayor and TfL will also look to further encourage boroughs to reduce speed limits across London.