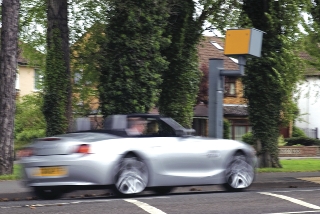 Last week saw the Sun call for official rules on using speed cameras to be reinstated — saying that they have been quietly scrapped by the Government since first published eight years ago.

Under the old Department for Transport rules, reviewed in 2013, cameras had to be yellow and clearly signposted. But the tabloid said that the guidelines have now been axed with no announcement or consultation.

It added that a DfT spokesman said the 2007 rules were out of date. He commented: “We don’t issue guidelines at the moment. It’s up to Highways England and, for local roads, police.”

In response Rob Gill, motors editor, said the “Gatso Gestapo” had gone too far and launched the Sun’s campaign calling for cameras to be clearly visible and not hidden by devious means such as behind trees, bushes, bends… or in tractors.

The campaign also calls for fixed speed cameras to be painted yellow and be luminous under headlights at night, and for them to be placed only at spots where there is a significant accident rate.

Finally, all traffic police with speed guns must wear hi-viz clothing, it says.

The Sun also quoted Edmund King, president of the AA, as saying: “The objective of any speed camera should be to slow traffic down, not to issue thousands of tickets.

“If cameras are well signed and stand out they are more likely to cut speeds. That’s a much more open and effective system than hiding in a tractor.”

In response, The Guardian has said the Sun’s campaign against speed cameras is “encouraging dangerous behaviour that blights communities and kills”.

Saying that speeding drivers are criminals, reporter Peter Walker said: “Let’s just imagine a national newspaper ran a front-page campaign demanding that young people were given a few hours’ warning before police carried out searches for knives, giving them time to hide the weapons. The outrage would be universal.”

He also pointed to government data that lists breaking the speed limit as a factor in almost 220 road deaths a year, rising to 350 if you include travelling too fast for the conditions.

He added: “There is, of course, an argument that visible speed cameras are a better deterrent than stealth. But with its talk of the “Gatso Gestapo”, the Sun is going way beyond this, not least the idea that no speed camera should be installed before a set number of people have been killed or maimed.”

He concluded: “Barring the fraction of a per cent of people who happen to have a transplant organ in their boot, speeding is never a matter of necessity. It’s choice.

Previous: TMC to drive IT strategy under new chief information officer
Next: FairFuelUK warns government not to introduce 'knee-jerk' measures on diesels