Highways England is slashing the speed limit to 60mph on four stretches of motorway under a trial to assess the effects on air pollution. 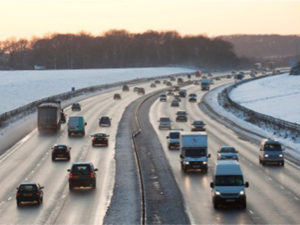 The trials on four sections of motorway will go live at the end of September, initially for a planned 12 months

The areas have been chosen as they all have high levels of nitrogen dioxide (NO2) from car engines.

The reduced speed limits, which will be operational 24 hours a day, will be assessed after 12 months to see if they’ve helped improve air quality.

Ivan Le Fevre, head of environment at Highways England, said: “We have a duty to tackle air quality around our network and as part of this we are trialling 60mph speed limits on short sections of our network where action needs to be taken.

“Ultimately the air quality challenge will be solved ‘at the tailpipe’ by vehicle manufacturers and changes in vehicle use. Until this happens we will continue our extensive programme of pioneering research and solutions.

“The speed limits trial will stay in place until the shift to cleaner vehicles means we can remove the restrictions and maintain cleaner air.”

It’s not the first time 60mph limits have been contemplated; they’ve been mooted by campaign groups in the past and were explored in 2014 under former Transport Secretary Patrick McLoughlin and the then-Highways Agency with a view to keeping them in place until 2019 – when it was believed car pollution would have dropped to sufficient levels.

However, there had been concerns over the negative impact on business efficiency and individual mobility and, speaking at the time, McLoughlin said all motorways should run at 70mph. The plans were dropped and smart motorway schemes were pursued instead.

Previous: York to go live with e-scooter trials
Next: Killer drivers to get life sentences under ‘long overdue’ reforms