Smart ‘connected’ cat’s eyes, which alert drivers to changing traffic lights from up to 1,000 metres away, are to be used for the first time at a motorway junction to improve safety for drivers. 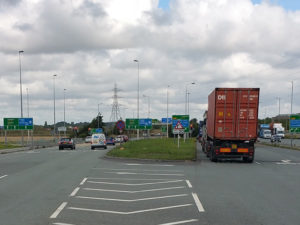 ‘Smart’ cat’s eyes, which light up in response to changing traffic lights, are claimed to improve safety for drivers

Highways England is to install around 170 of the ‘intelligent’ LED road studs at Switch Island in Merseyside, where the M57, M58 and 3 A roads all join together, as part of a £3m project to improve journeys and safety.

Proven to help stop drivers drifting between lanes, reducing the risk of collisions, the LED road studs light up when traffic lights turn green so drivers can clearly see which lane they should follow. Cables under the road surface connect them to traffic lights through a nearby automatic controller unit.

The LED studs at already installed at  the Hindhead Tunnel in Surrey but the Switch Island scheme will be the first time they have been linked to traffic lights at a motorway junction. Highways England said their use on other schemes is also being considered.