BMW’s forthcoming 2019 3 Series 330e Saloon will offer extra range and performance but with lower CO2 emissions when it goes on sale next summer. 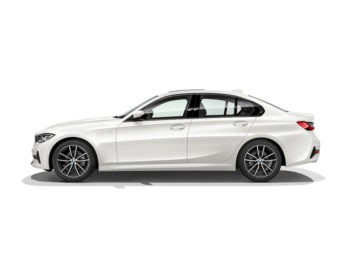 Announced following the global reveal of the new generation BMW 3 Series, the plug-in hybrid variant sticks with the 182bhp 2.0-litre four-cylinder petrol engine in the current set-up, married up with an electric motor that generates a continuous output of 67bhp and a peak output of 112bhp, and an eight-speed Steptronic transmission. This gives a total 249bhp of power and 310lb.ft of torque, as with the current model.

However, a major new addition to the 2019 model is the standard-fit XtraBoost, which provides an extra 41bhp by drawing on the battery when available. This means the latest model brings a 0-62mph time of 6.0 seconds with a 143mph top speed (6.1 and 140mph previously).

The new BMW 330e Saloon also features a new 12.0kWh lithium-ion high-voltage battery compared to the previous 7.7kWh set-up. This brings an increase in the electric-only range, which rises 48% from 25 to 37 miles while it can also travel up to 68mph when running on electric power alone – 18mph faster than the predecessor model. However, boot space falls from 480 litres to 375 due to the battery positioning.

Meanwhile CO2 emissions have been reduced by more than 10%, from 44g/km in the current model on the NEDC cycle to 39g/km on the NEDC Correlated cycle while official combined fuel consumption is now 138mpg compared to 134.5mpg.

Other changes include new sound capabilities to replicate the noise of a performance engine while drivers can also specify an acoustic pedestrian protection function to help pedestrians hear the car when it’s in electric-only mode.

The 330e also gains new satnav services to provide added information on charging, including forecasting the occupancy status of the public charging station at the time of arrival.

Trim range covers SE, Sport Line and M Sport versions – with pre-heating and pre-conditioning of the interior as standard on all models – and most options on the standard 3 Series are also available. The 330e can also be fitted with the Adaptive M suspension including Variable Sports Steering and the M sports brake system.