Plans by the Department for Transport to close a loophole in mobile phone legislation should be broadened to address wider distracted driving issues. 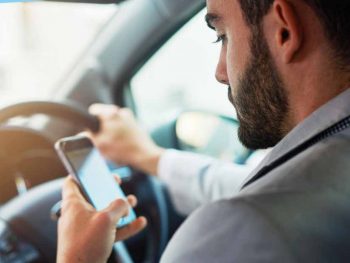 The proposed changes to the UK mobile phone law would ensure that when a driver chooses to handle a mobile phone while driving, for any purpose, they are committing a criminal offence

So says Transport Research Laboratory (TRL), adding that “we must be braver in what we demand from drivers” and has called for work to explore the dangers of in-car technology.

Driver distraction is estimated to be a factor in up to 30% of vehicle collisions across Europe and to tackle the issue, last year saw the DfT pledge to close a legal loophole that saw drivers able to use mobile phones for tasks other than calls and texts (“interactive communication”) and that allowed drivers to escape prosecution for hand-held mobile phone use while behind the wheel.

At present, the law prevents drivers from using a hand-held mobile phone to call or text. However, people caught filming or taking photos while driving have escaped punishment as lawyers have successfully argued this activity does not fit into the ‘interactive communication’ currently outlawed by the legislation.

A consultation on the subject ran from 17 October 2020 to 17 January 2021 and explored broadening the offence of using a hand-held mobile phone while driving so that it captures standalone mode functions as well as the existing interactive communication functions.

The proposed modification would ensure that when a driver chooses to handle a mobile phone while driving, for any purpose, they are committing a criminal offence.

The Transport Select Committee has also previously said the Government should look at introducing tougher penalties for all mobile phone usage behind the wheel – including banning hands-free devices, starting first with public sector drivers; part of its ‘Report on Road Safety: Driving while using a mobile phone’.

TRL has said that the suggested changes are last year’s DfT consultation are sensible. But it adds that the current law, and the proposed new one, represent another missed opportunity to consider the research evidence on distracted driving more widely – it says the next step must be for further research to inform regulation which moves beyond the current simplistic understanding of distraction being about ‘holding’ versus ‘not holding’.

A focus on banning hand-held device use could even legitimise the use of other interaction modes with mobile devices or in-vehicle alternatives, many of which TRL says are still fraught with danger based on its research. There is a lack of understanding and regulation around the real levels of distraction, and impacts on safety, which are acceptable. This can only be addressed through further examination.

TRL’s comments come on the back of its research last year which found that advances in voice-activated systems for in-car controls could significantly improve safety for drivers and other road users. It’s said that improving voice-activated systems through the use of solutions such as conversational artificial intelligence (AI) could make such systems could become less distracting for drivers.

Shaun Helman, chief scientist at TRL, said: “The focus on ‘hand-held’ devices misses the point – drivers’ eyes and minds must be on the road and it is not enough to only ensure that their hands are on the steering wheel.

“As a society, we must be braver in what we demand from drivers, from policy and from design in road safety. We must ask whether we are happy for people to be driving below their optimum performance level, and if so, how far below? In short, how safe is safe enough?”