MINI will launch a new, larger Countryman crossover next February, with a range set to include the brand’s first plug-in hybrid from the summer. 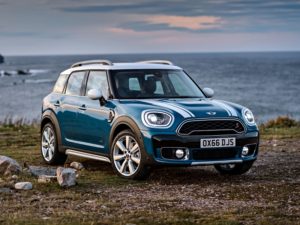 The 2017 Countryman will be MINI’s first plug-in hybrid.

Repositioned alongside the Clubman, the new Countryman shares its platform and engines with the BMW X1 and will give MINI a rival for products such as the Audi Q3, Mercedes-Benz GLA-Class and Range Rover Evoque. Prices start at £22,465.

Traditionally the second largest-selling bodystyle after the hatchback, and an important fleet model for MINI, the increased size means it offers three full-size rear seats with larger door openings, a sliding bench and 50% larger boot, accessed via an optional electronically opening tailgate with a fold-out picnic table. As in the Clubman, equipment levels are higher than its predecessor, including satellite navigation as standard.

From launch, the range will comprise four turbocharged engines; two petrol, and two diesel, all available with two or four-wheel drive, and (except the Cooper SD) with either automatic or manual transmissions.

From June, the range will grow to include MINI’s first production electric car. The Cooper S E Countryman utilises the same plug-in hybrid drivetrain as the BMW 225xe; a 1.5-litre petrol engine powering the front wheels, and an 88bhp electric rear axle, supplied by a mains-rechargable battery offering a 25-mile EV range. Pricing is unconfirmed, but 49g/km CO2 emissions will make it an attractive company car.