David George becomes the new director for Mini UK, with effect from 25 January. 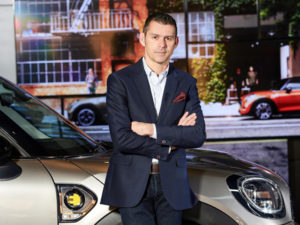 David joins Mini UK from his previous role as sales director at Mercedes-Benz UK. He brings substantial experience gained across sales, marketing and aftersales from a career in the automotive industry which started at Volkswagen Group in 2000.

Commenting on his appointment, David George, director, Mini UK, said: “I first fell in love with the brand at the age of 21 when a friend and I travelled across Europe in a Clubman which we had restored. I have long since admired the Mini range after the launch of the Mini Hatch in 2001.

“With new Mini Hatch and Mini Convertible models launching in March and the first fully-electric production Mini set to be revealed next year, the future looks incredibly exciting.”