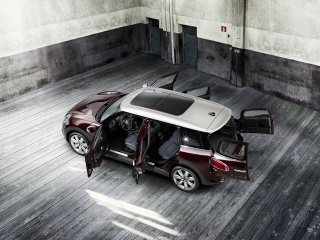 Launching at the end of October, the new Clubman is almost identical in width and length to the Volkswagen Golf, and positioned as a lower-medium hatchback rather than an estate supermini as its predecessor was. However, it retains the split rear barn doors – unique in the class.

This will enable MINI to target conventional C-segment customers more effectively than it has to date – the Countryman crossover has traditionally catered for those who have outgrown the hatch. Very little customer crossover is expected between the outgoing Clubman and the new car, and the next Countryman is likely to focus more on the growing B-SUV segment, led by the Nissan Juke.

The Clubman range will follow the familiar trim levels, comprising the Cooper and Cooper S petrols and the 148bhp Cooper D diesel, which is likely to be the big corporate seller. This is priced at £22,190 and returns 68.9mpg with CO2 emissions of 109g/km. There are no plans to offer the One or One D versions, but a Cooper SD is likely though unconfirmed.

All versions get satellite navigation, Bluetooth connectivity and DAB radio. The Chili Pack, priced at £2,785, which part-leather upholstery, automatic air conditioning and rear parking sensors among its additional features, is expected to be as popular on the Clubman as it is on other models.

MINI is steadily evolving its product portfolio, which is broadening its fleet appeal. The five-door MINI hatch has enabled the brand to reach a wider audience in the supermini class, and fleet sales have grown from 6,000 in 2014 to around 10,000 expected in 2015 – around 15% of the brand’s total. The corporate share is expected to grow to 17% next year, against a backdrop of increased sales from the Clubman.

New products are backed by investment in the way it speaks to fleet customers. All of its 150 UK dealerships have dedicated corporate specialists, with a central call centre, information portal and aftersales charter launched recently and an evolution of the TLC service programme expected to better cater for fleets as of 2016.

Previous: Audi to preview Q6 all-electric SUV at Frankfurt
Next: What’s in store for dealers?