A £149m tram route extension linking Birmingham city centre with Edgbaston and the city’s growing Westside area has been given the go-ahead. 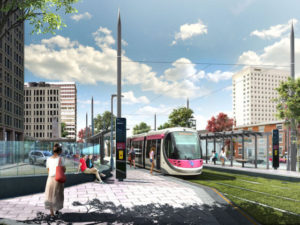 The 2km extension of the Midland Metro, from Grand Central, outside Birmingham New Street station, to Edgbaston, opens in March 2021 and will bring five new stops served by up to 10 trams an hour at peak.

Transport Minister Paul Maynard said: “This new extension will be a further boost to Birmingham businesses, and make travelling to work easier for commuters. But just as importantly, it will help ease the pressure on the roads as it will provide an alternative for getting in and out of the city centre.”